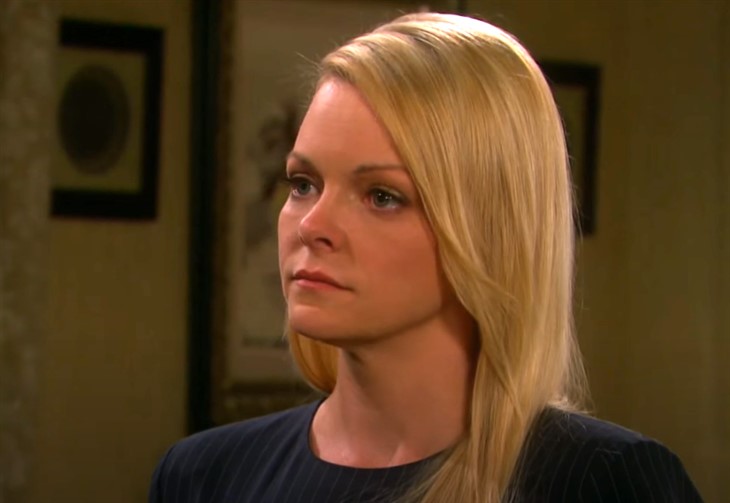 Days of Our Lives (DOOL) spoilers reveal that in Salem Rafe Hernandez (Galen Gering) arrests Belle Brady (Martha Madison). It is widely assumed that Belle is arrested for Charlie Dale’s (Mike Manning) murder. However, it could be connected to another crime, which explains why Jan Spears (Heather Lindell) stole Belle’s coat button.

DOOL spoilers reveal that Belle defended Sami Brady (Alison Sweeney) when she was arrested for Charlie’s murder. Belle was pretty angry that Sami had lied to her. Belle isn’t known for lying or violence. Even after everything Jan did to Belle and her family, she still didn’t react with violence. So, it seems completely out of character for her to suddenly commit murder. While it’s possible that she does get arrested for Charlie’s murder, there is reason to believe the arrest is for something else.

Jan stole Belle’s red coat button last week. She even made sure to mention it to “Miss Perfect.” Belle was confused about where she could have lost it. Now, the crime scene for Charlie’s murder has already been processed. There is always the chance that Rafe combs the crime scene again looking for clues, but it’s not likely.

So, Jan couldn’t go in and drop the coat button to implicate Belle, especially if she’s still hospitalized. However, Jan could commit a crime or pretend to be a victim, blame Belle, and leave the button as “evidence.”

Days of Our Lives spoilers reveal that during the week of April 19, Rafe confronts Belle. Later in the week, he ends up placing her under arrest. We have to wonder if it really is for Charlie’s murder or another crime. There is also the chance that Belle is arrested for protecting someone else. Maybe John Black (Drake Hogestyn) really did kill during his blackout.

Days Of Our Lives Spoilers: Xander And Chanel Blackmail Each Other, Fake Marriage Has Twist #Days #DOOL #DaysOFOurLiveshttps://t.co/XFgsmYjAQ8

DOOL Spoilers – Not A Murderer

Depending on how far she goes, Belle could face charges of tampering with evidence, withholding evidence, or even providing a false police statement. It’s more serious for an officer of the court to do this than a civilian. Rafe also just might be fed up with everyone making his job more difficult. We just have a very hard time believing that Belle would kill another human being unless it was in self-defense.

Why do you think Belle gets arrested? Is it for Charlie’s murder or is she accused of another crime? Is Jan stealing her red coat button part of this storyline or will it be saved to use later on? We will have to keep watching the NBC soap to find out what happens next.