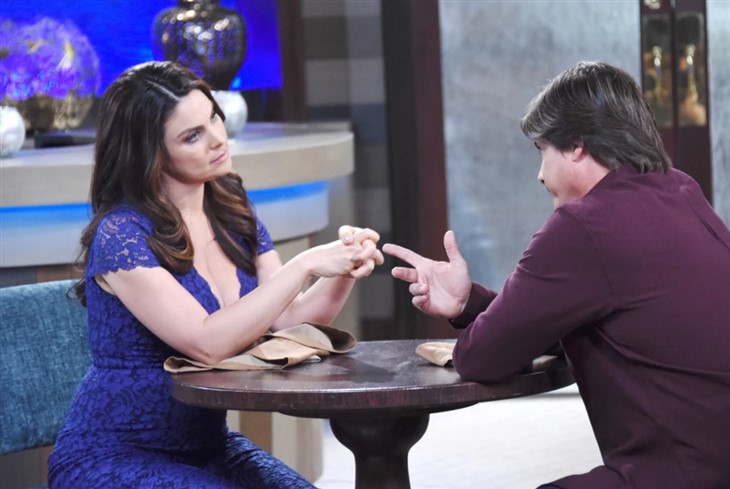 Days of Our Lives (DOOL spoilers for the week of April 26 reveal that Sami Brady (Alison Sweeney) blasts her ex. He agreed to go along with the plan to keep Kristen DiMera (Stacy Haiduk) quiet. His part is to pretend to have feelings for Chloe Lane (Nadia Bjorlin). He plays along at first but eventually can’t do it anymore. His decision could jeopardize Sami’s life.

Days Of Our Lives – Why Lucas Horton Agrees

DOOL spoilers reveal that when Lucas and Sami slept together, they both woke up with different intentions. Lucas wanted to try having a relationship again. However, Sami insisted that she was in love with her husband. So, when Sami told her ex about Kristen and the deal they made, he went along with it. Dattilo explained to Soap Opera Digest that Lucas does what he has always done. Gone along with Sami’s plans in order to keep her happy.

“He doesn’t want to do it. He likes Chloe in the sense that he doesn’t want to mess with her, but at the same time, he realizes that he really has no choice because the alternative is this whole blow-up will happen. So he goes along with it, as he does with a lot of things, just to make Sami happy and to keep her content, but he also feels badly about what he will have to do to Chloe.”

Sami tells Lucas that he has to romance Chloe in order to get her away from Brady Black (Eric Martsolf. Lucas doesn’t want to do this because he’s a decent guy and knows exactly how it feels to be played that way. However, Sami is desperate and once again, he goes along with the plan to keep her happy.

Days of Our Lives spoilers for the week of April 26 reveal that Sami will lash out at Lucas. We have to imagine that he probably plays Chloe in the beginning. However, when he’s pushed to go further with her, Lucas just can’t go through with it. He might not expose Kristen’s secret, but him backing out of the plan puts Sami at risk.

Days Of Our Lives Spoilers: Kristen Blackmails Lucas – Wants Him To Sleep With Chloe https://t.co/Y90kXIQQhE pic.twitter.com/VzzyFJwDY2

Sami will do anything not to lose the man she loves. Kristen would make good on her threat and probably add more severe consequences. Considering how desperate Kristen is to get Chloe out of the way, Lucas’ decision could put Sami’s life in danger. When will the ruse finally be exposed? Will it take someone else getting hurt or even killed before Kristen is caught impersonating Susan Banks? We will have to keep watching the NBC soap to see how this story develops.