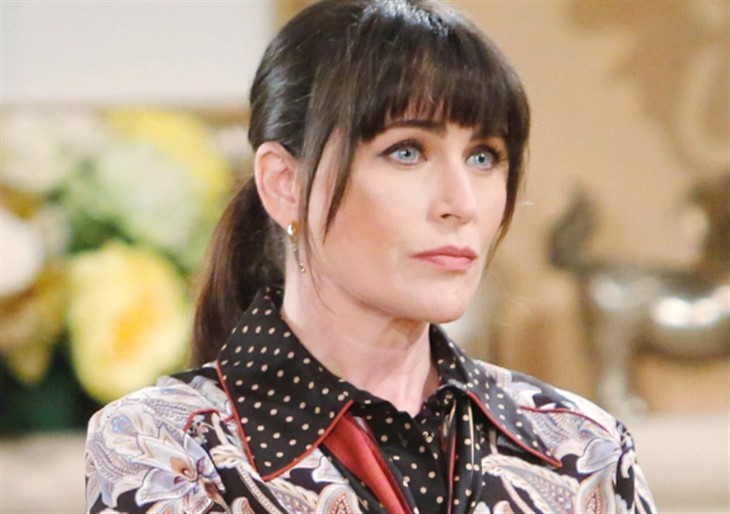 The Bold and the Beautiful (B&B) spoilers reveal that in Los Angeles Zoe Buckingham (Kiara Barnes) has found an unexpected ally. However, Quinn Forrester (Rena Sofer) needs to tread carefully. Eric Forrester (John McCook) is already questioning if there is even a marriage left to save. It is possible that the alliance could end up making Quinn’s relationship even worse.

The Bold And The Beautiful Spoilers – Quinn Forrester’s Promise

B&B spoilers reveal that Quinn made her husband a promise. She would give up the scheming and manipulation, especially when it comes to the people Eric cares about. Of course, he was mainly talking about Ridge Forrester (Thorsten Kaye) and Brooke Logan Forrester (Katherine Kelly Lang). Quinn made that promise but she needs to be careful about what she does and with whom.

When it was reported that Quinn and Zoe would form an alliance or even a friendship, fans were confused. Why would Quinn care about someone like Zoe? It has nothing to do with the income gap or social status. It has to do with the things that Zoe has done. Sure, Quinn has plenty of experience being the underdog and clawing her way to the top. However, Quinn and Zoe aren’t even on the same level.

We know that Quinn is really bored and craving some scheming. Another possibility is that Quinn needs Zoe for something, we just don’t know what it is yet. There aren’t too many people who are willing to go along with Quinn’s schemes anymore, including her BFF Shauna Fulton (Denise Richards).

The Bold And The Beautiful Spoilers – Zoe Buckingham’s Reputation

The Bold and the Beautiful spoilers reveal that Zoe could negatively impact Quinn simply by association. Ridge is furious with how Zoe treated Carter Walton (Lawrence Saint-Victor). Even though Eric is one of the most forgiving characters on the soap, even he must have issues with Zoe’s actions.

Eric is already questioning his decision to let Quinn back in his life. Even though he loves her and forgives her, there is something unspoken. It’s confirmed in the new issue of Soap Opera Digest that Eric doesn’t trust his own wife. So, when he finds out about Quinn’s new bestie, it could send an already shaky marriage over the edge. Zoe is only known for one thing and that’s cruel scheming. That is one thing that Eric has no tolerance for anymore and wants Quinn to give up.

What do you think is Quinn’s real reason for befriending Zoe? Is she looking for a new partner in crime? How will her alliance with Zoe end up affecting her marriage to Eric? Is the new friendship more trouble than it’s worth? We will have to keep watching the CBS soap to find out how this story ends.