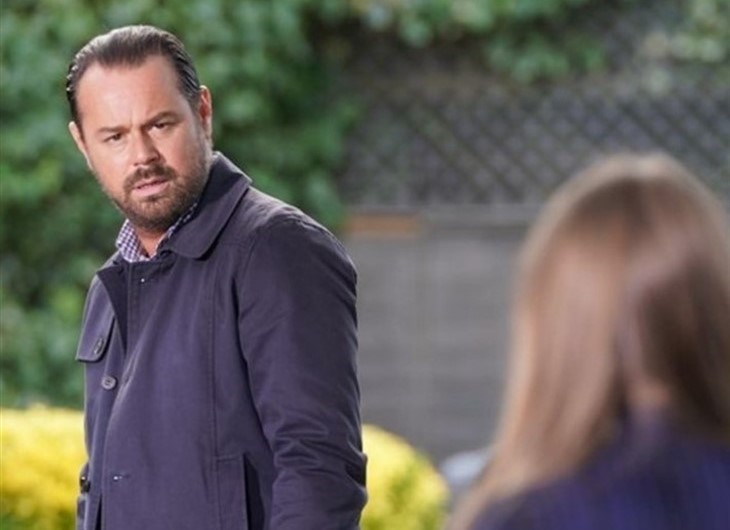 Eastenders spoilers reveal that in Walford Frankie Lewis (Rose Ayling-Ellis) returns and will forever be connected to the Carter family. Producer Jon Sen recently talked about what to expect in 2021. He confirmed that Frankie and Mick Carter (Danny Dyer) are intertwined. As the abuse goes public, Mick will continue to deal with the impact while Frankie struggles with everyone knowing.

Eastenders spoilers for the new year reveal that Frankie will return and reconnect with the Carter family. Even though Mick finally confronts Katy Lewis (Simone Lahbib) with the truth, his journey is not over. There is still a lot of recovery that has to happen, but not just for him. This has been a huge shock for Frankie too, who is the product of that abuser.

According to Digital Spy, the abuse goes public and everyone finds out the truth about Katy. She was almost thought of like a saint and people couldn’t stop singing her praises. However, it was a cover as she is really a pedophile. Mick most likely wasn’t her first victim and probably wasn’t her last. With the abuse going public, she can’t manipulate Mick anymore and now everyone knows the truth about her.

“We’ll also see the ongoing effect of Mick’s abuse and with Frankie intertwined with the Carters evermore, she struggles now that the truth is out.”

Eastenders spoilers reveal that Sen explained that Mick will continue to deal with the effects of being sexually abused when he was younger. He’s never really had to face it before and Frankie announcing she might be Mick’s daughter changed all that. While it was painful for Mick, it was important that the issue be addressed. It was also imperative that Katy be exposed and stopped.

Struggling With Everyone Knowing The Truth

The producer also confirmed that Mick won’t be the only one dealing with the effects of the abuser or the truth coming out. Frankie will be forced to deal with that, as well. Sen told the media outlet, “We’ll also see the ongoing effect of Mick’s abuse and with Frankie intertwined with the Carters evermore, she struggles now that the truth is out.”

What Else To Expect

Other Eastenders spoilers include Gray Atkins (Toby-Alexander Smith) being punished for killing Chantelle Atkins (Jessica Plummer) and Tina Carter (Luisa Bradshaw-White). Sharon Beale (Letiticia Dean) is only getting started with Ian Beale (Adam Woodyatt). There will be justice, revenge schemes, new romances and fan-favorite couples that don’t last. Plus, much more is coming up for the characters.

What would you like to see happen with Mick Carter and Frankie Lewis? Do you have any predictions for certain characters or storylines?