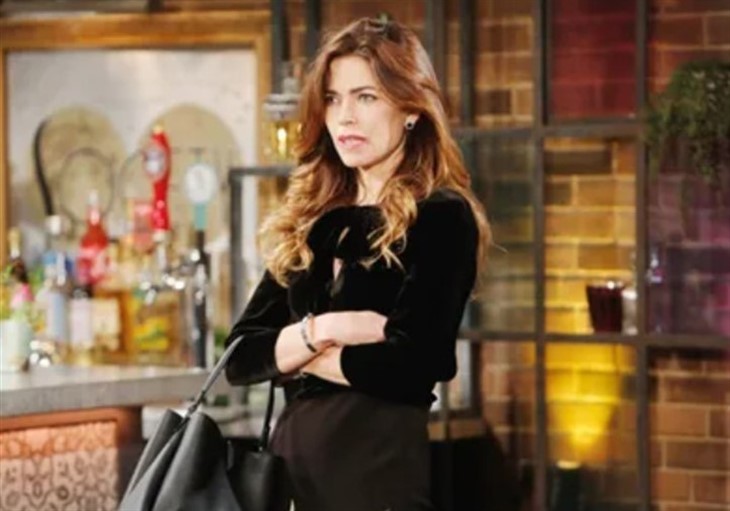 The Young and the Restless (Y&R) spoilers tease that in Genoa City, Wisconsin Phyllis Summers (Michelle Stafford) will score a big win – and you can bet she’ll love every minute of it! Y&R fans know Phyllis and Victoria Newman (Amelia Heinle) have become fierce foes, so Phyllis is hoping to bring down her rival.

Although Kevin Fisher (Greg Rikaart) got rid of the flash drive with incriminating evidence, Phyllis has no intention of letting this go. There’s an embezzlement scandal cover-up that’s just waiting to explode, so Phyllis will still make it happen. Gloria Fisher Bardwell’s (Judith Chapman) imminent return may fit right in with Phyllis’ sneaky plan.

Regardless, Victor Newman (Eric Braeden) will be furious when he finds out Victoria hid something so huge from him. We’re talking about a CFO who got off scot-free after embezzling millions of dollars. Victoria didn’t want Victor to fire her, so she made sure the funds were replaced and just let the guy retire without real consequences.

However, the fact that Victoria lied may be what Victor finds most troubling. Victor takes great pride in the company that bears his name. This is certainly something Victor would’ve wanted to be in the loop on, but his deceptive daughter didn’t allow that.

Victor may wonder what else Victoria might be lying to him about. He won’t trust Victoria anymore and that’s a problem since Victoria is the CEO of Newman Enterprises. Victor needs to know the company is in good hands, but he won’t be so sure of that after this cover-up is exposed.

Y&R viewers can expect a major faceoff over Victoria’s actions and what’s going to happen moving forward. The Young and the Restless spoilers say Victor will lay down the law as he delivers a harsh ultimatum.

Will Victoria be forced to step down or face the humiliation of being fired? Will Victoria be allowed to remain in the role with strict new rules in place? Victor may warn Victoria to shape up or ship out – that is if he gives her another chance at all!

The Young and the Restless spoilers say this father-daughter showdown will bring Victoria’s punishment and Phyllis’ satisfaction, so tune in during the week of January 25-29. As other news and updates roll in, we’ll keep you posted.

Y&R fans will see some great curveballs as Victoria deals with the fallout of Phyllis’ revenge plot. CDL will have all the scorching Young and the Restless spoilers, updates and news you’re looking for, so pop back in soon.