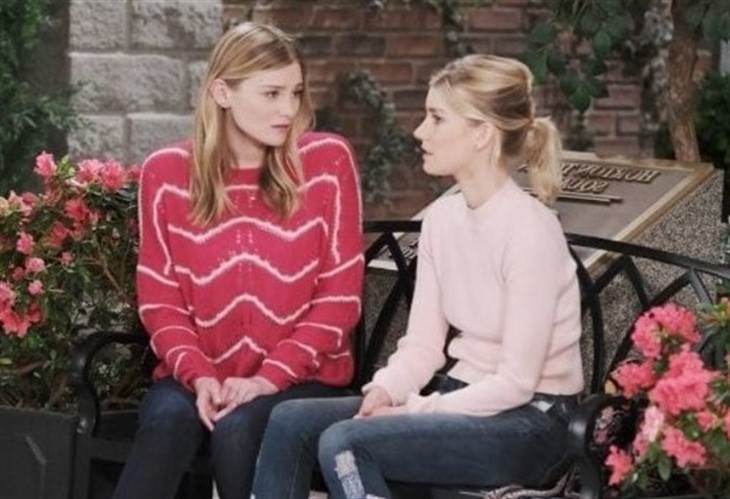 Days of Our Lives spoilers reveal that Claire Brady (Isabel Durant) tells Allie Horton (Lindsay Arnold) about her failed attempt to get a confession. Once Allie hears what happened, she vows to end Charlie Dale’s (Mike Manning) reign of terror. Later, she confesses and Claire fears she will go to prison. Can she act fast and prevent Allie from going to prison?

DOOL spoilers reveal that Claire is distraught after her close call with Charlie. She got him to confess and had it on tape. But then he discovered what she was doing. If it weren’t for Belle Black (Martha Madison) walking in, Claire might be a dead woman. She confides in Allie about what she tried to do to help. Even though she’s not at fault, Claire feels responsible for introducing a monster into her family.

When Allie hears what Claire has to say, she is furious. She is beginning to feel like Charlie will never be held accountable. Allie makes a vengeful vow to end Charlie’s reign of terror once and for all. Durant told Soap Opera Digest that Allie’s threat really startles and alarms Claire.

“This really scares Claire because she’s seen the growth that Allie has had throughout this trauma that she’s experienced. So when she sees that Allie could potentially throw that all away in order to get justice, it really freaks her out. The idea of Allie ending up in prison is something that terrifies Claire.”

Days of Our Lives spoilers tease that during the week of February 22, Allie will make a confession. It’s not revealed if she confesses to a crime or something else. However, with so much action happening surrounding Charlie’s murder and the whodunit mystery, what else could it be? Even if Allie confesses to killing Charlie, it won’t be that cut and dry. It’s possible that Allie attacks her rapist and just thinks he’s dead. Then someone else comes along and finishes the job. Or she might be trying to protect the real killer, who could be someone she cares about. Allie might believe that she’ll get off because of being a victim.

We’re really not sure how this is going to play out, but we have a hard time believing Allie will commit murder. After all, remember her failed attempt to shoot off Tripp Dalton’s (Lucas Adams) family jewels?

Claire cares so much about Allie and feels tremendous guilt about getting involved with someone like Charlie. She also fears Allie will be thrown in prison and separated from her baby. These factors could have Claire taking drastic action to save Allie from a prison sentence. However, it seems that this murder mystery will have a lot of twists and layers. It’s going to get complicated, so stay tuned to find out what happens next.

Be sure to catch up on everything happening with DOOL right now. Come back here often for Days of Our Lives spoilers, news, comings and goings, and updates.