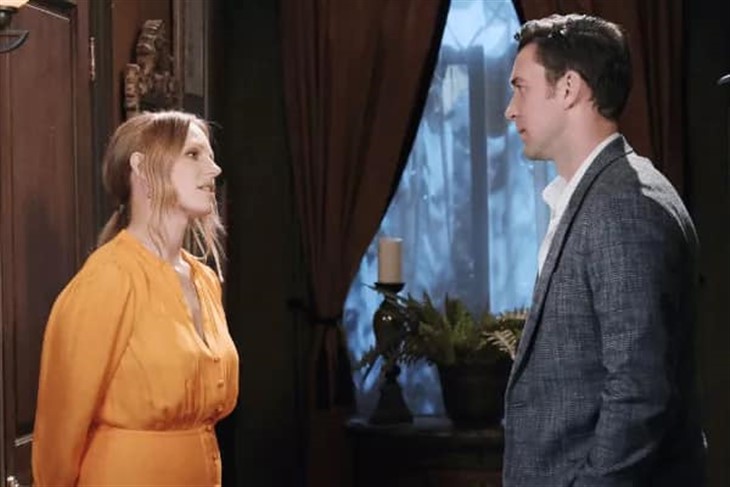 Days of Our Lives (DOOL) spoilers for Thursday, October 14, 2021, reveal in Salem EJ DiMera giving a reunited Chad and Abigail DiMera the shock of their lives. Are they about to experience a blast from the past?

Days Of Our Lives Spoilers – A DiMera Affair To Remember

Chad (Billy Flynn) has been waiting to have Abigail (Marci Miller) back in his arms for months on end and rehearsing for Johnny DiMera’s (Carson Boatman) movie finally brought them together. Chad and Abby are thrilled to be together again, but on Thursday they learn that things are about to get complicated.

Not only is EJ (Daniel Feuerriegel) throwing his money into his son’s film becoming business partners with Chad, he is also going to play John Black (Drake Hogestyn) against Abby’s Dr. Marlena Evans (Deidre Hall), aka MarDevil. Now, won’t that be extremely awkward? EJ and Abigail did have a steamy affair at one time and it was in a very steamy shower for some scenes DOOL fans will never, ever forget.

How will Chad and Abby feel about this turn of events? Can EJ and Abby put their personal feelings aside and just be professional? Or was Abigail the reason EJ insisted he plays this part? We can see Chad telling Abby she can no longer play Marlena, which likely won’t go over well. Is this also part of EJ’s plan?

DOOL Spoilers – What Is EJ DiMera Up To Anyway?

It looks like EJ really has a thing for ex-wife Nicole (Arianne Zucker) now. They even went on a date and are scheduled to go out on another one. What kind of game is he playing with both Abigail and Nicole? Maybe Sami Brady (Alison Sweeney) was right when she said she didn’t know this EJ anymore. EJ was never a saint, but his new actions seem to be a bit much.

Even Rafe Hernandez (Galen Gering) wants to know what Nicole is doing with EJ and asks her all about her date. Nicole doesn’t really think this is any of Rafe’s business considering he is dating Ava (Tamara Braun). Whatever Nicole decides to do with her time is up to Nicole and she lets Rafe know it. Will Rafe realized he already passed up his chance? Stay tuned to Days of Our Lives weekdays to see how these stories play out.