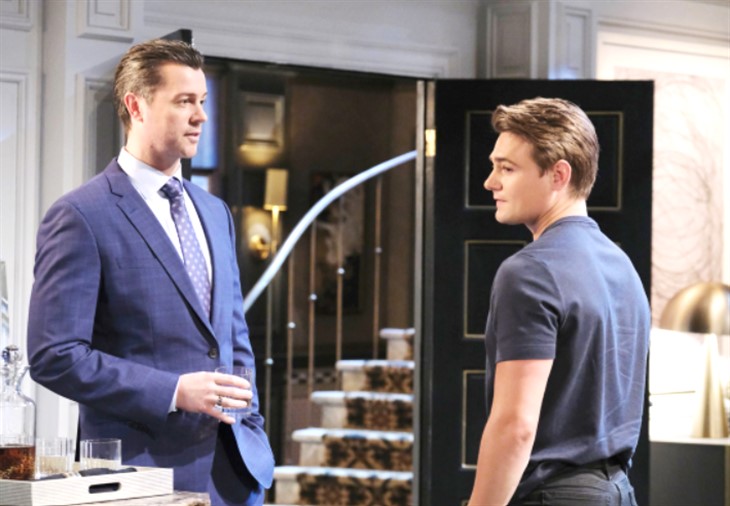 Days of Our Lives spoilers for next week of October 11 reveal that Chad DiMera (Billy Flynn) is blindsided. Right after he makes a deal with Johnny DiMera (Carson Boatman), EJ DiMera (Dan Feuerriegel) strikes back. Chad and Abigail DiMera (Marci Miller) are going to film a “Jarlena” love scene together in Johnny’s movie. However, Chad is replaced with EJ at the last minute.

DOOL next week spoilers reveal that Johnny asked Abigail to star in his movie. The aspiring filmmaker is no longer interested in recreating Sami DiMera’s (Alison Sweeney) life. Johnny thinks that making a movie about Marlena Evans’ (Deidre Hall) possession will be more successful. Even though Abigail never considered being an actress before, she is flattered by the offer. Chad assumes his wife will turn down the movie role, but is surprised when Abigail decides to accept it.

A big part of Marlena’s possession story is her affair with John Black (Drake Hogestyn), who was a priest at the time. Chad still isn’t over Abigail’s affair with Stefan DiMera (Brandon Barash). Even though Abigail was being controlled by one of her alters, Chad still hasn’t been able to truly overcome what happened. So, when Chad realizes that Abigail is going to have a love scene, he takes action.

Chad makes a deal with Johnny so that he can play John in the movie. That way, he will be the only man kissing Abigail.

Days of Our Lives spoilers for the week of October 11 reveal that EJ is starting to unravel and lose control. Despite his best efforts to stop the movie, Johnny has managed to get a few investors. Chad knew exactly how EJ felt about Johnny’s new career. So, when Chad becomes involved in the film, EJ will view it as a betrayal and an attack.

EJ comes up with an idea to not only punish Chad, but put Abigail in an awkward position. Bitter about his own marriage imploding and Nicole Walker (Arianne Zucker) fixated on Rafe Hernandez (Galen Gering), EJ will target “Chabby.” If EJ can’t find love and be happy, then nobody can.

It is teased that EJ makes Johnny a generous offer. Even though Johnny doesn’t want to betray Chad, he might not be able to pass up EJ’s proposition. Chad and Abigail are both blindsided when there is a last-minute change to the casting. Chad is stunned and enraged when he doesn’t get to play John. Instead, Abigail will be acting out a love scene with EJ. What makes this especially horrific for Chad is that EJ and Abigail have a history together.

Chad might think that Abigail will walk off the set. However, she could make a surprising decision. When she agrees to do the love scene with EJ, it’s not because she wants her brother-in-law. Abigail wants Chad to know exactly how she felt when he slept with her half-sister, Gwen Rizczech (Emily O’Brien). However, Abigail’s decision just might rip “Chabby” apart for good.