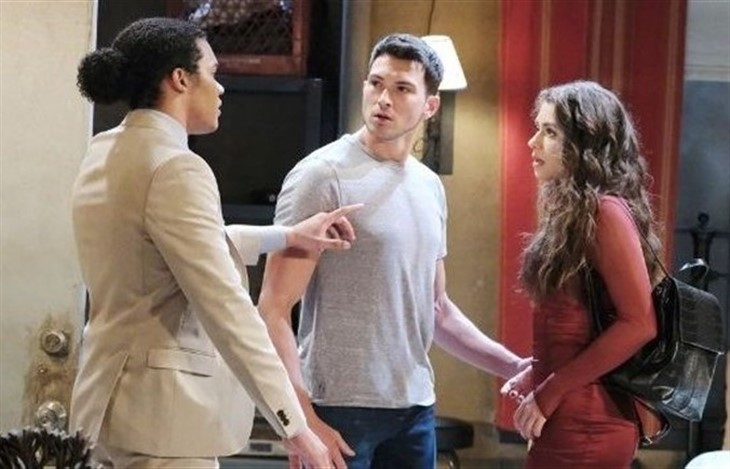 Days of Our Lives (DOOL) spoilers reveal in Salem Ciara (Victoria Konefal) and Ben (Robert Scott Wilson) taking a trip together on the Days of Our Lives: Beyond Salem Peacock series, so we assume Ben’s plan of kidnapping her so she doesn’t marry Theo works. That leaves Theo all alone.

Days Of Our Lives Spoilers – Is Chanel Dupree The Woman For Theo Carver?

At the moment, Chanel (Raven Bowens) is also alone after Allie (Lindsay Arnold) rejected her for Tripp (Lucas Adams) and two lonely people will make for one miserable couple. Chances are, Chanel and Theo will reunite, but can it work for them when neither one of them really wants to be with one another? Clearly, Chanel is someone who doesn’t like being alone but is she really the woman for Theo?

It’s hard to understand how Chanel is the woman Theo met while in South Africa that he rejected Claire for her. She is nothing like Ciara or Claire, the two other women Theo has loved. But perhaps he was attracted to how fly-by-night and flamboyant she is because he never had that in his life and spent so much of it being sheltered by Abe.

DOOL Spoilers – What About Allie Horton?

Theo knew in his heart marrying Ciara was wrong and tried to convince her not to go to South Africa with him when he first turned up alive so it made no sense he’d agree to marry her. Still, going back to Chanel would only be a rebound for him like Chanel turning to Theo would also be a rebound play.

Chanel is clearly in love with Allie and things will become much more difficult as these two young women go into business with each other while dating men and trying to deny their own attraction. Theo will already be coming off a heartbreak from Ciara. Can he take another one from Chanel when he realizes who she really wants?

It looks like a tangled web for Salem’s younger scene and a few people are bound to be left out in the cold. First, it will be Theo, then Tripp might also end up alone. There’s also no telling what Johnny DiMera will be like and who he might set his eyes on. So, stay tuned to Days of Our Lives weekdays to see what August and autumn will bring.