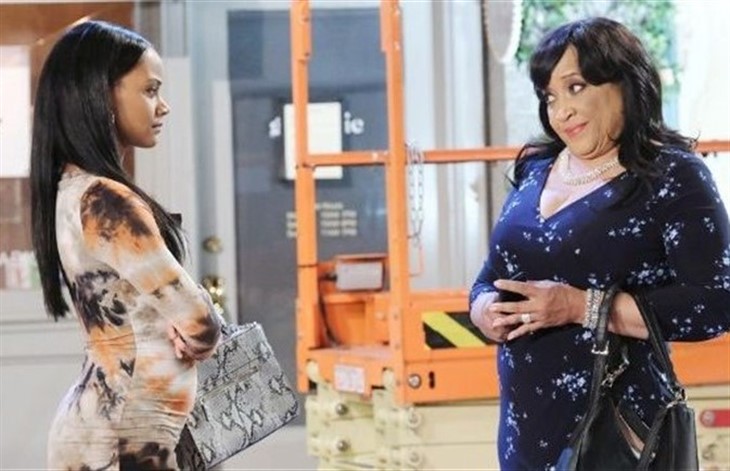 Days of Our Lives spoilers reveal that the soap is on a two-week hiatus for the Olympics. However, actress Raven Bowens explained her complicated character and what fans can expect. Chanel Dupree had a rough start but she’s undergoing a transformation. Determined to prove there’s more than meets the eye, get ready for a wild, yet impressive ride.

DOOL spoilers reveal that Chanel had a rough beginning in Salem. However, she is determined to have an incredible middle and end. Speaking on Dishin Days, Bowens explained that Chanel was just using her gifts and strong personality traits in the wrong way. The actress said that everyone has a passion but many people spend their whole lives looking for it. Chanel just happened to realize baking was her passion and decided to run with it.

The simple realization has set the character on an unexpected and exciting path. Her new journey includes a different set of aspirations, but it’s all with good intentions. It is also teased that Chanel’s business will actually be quite successful.

During the video chat, Bowens confirmed that Chanel has a lot of different sides to her. Fans (and Salemites) have only seen a few of them. As the weeks and months pass by, Chanel will start peeling away more layers. What people will discover is that Chanel is much more than what meets the eye.

Days of Our Lives spoilers reveal that Bowens and co-star Lindsay Arnold (Allie Horton) were excited about the bakery storyline. The cast members were thrilled that they weren’t being portrayed as society pegs female 20-somethings… as party girls with no real goals or potential. Bowens and Arnold are looking forward to the audience being able to see young women in business represented in a positive way.

Their gender and age are not the only stereotypes that are being crushed, though. Chanel and Allie are both “sexually fluid,” so they are breaking down LGBT generalizations, especially since the characters are completely different from each other. There are also the stereotypes that the black community has to deal with on a daily basis. So, with one character and a bakery, Bowens is shredding stereotypes of a 20-something black LGBT female.

Chanel and Allie are going to be able to open Sweet Bits after all. For about a week, it appeared as if Paulina Price’s (Jackée Harry) deception would destroy Chanel’s dreams. The two women will open their bakery as planned. Head writer Ron Carlivati told Soap Opera Digest that Allie and Chanel will get closer as they embark on their business venture. He also implied that Sweet Bits would be a success.

Even though Chanel was heartbroken when Allie chose Tripp Johnson (Lucas Adams), there is reason to believe the love triangle isn’t over yet. Allie and Chanel will still grapple with their friendship and feelings, but the dynamic will get even more complicated. It is hinted that Johnny DiMera (Carson Boatman) will be smitten with Chanel. There is also the question of if Theo Carver (Cameron Johnson) will turn to a familiar face when Ciara Brady (Victoria Konefal) remembers her love for Ben Weston (Robert Scott Wilson).