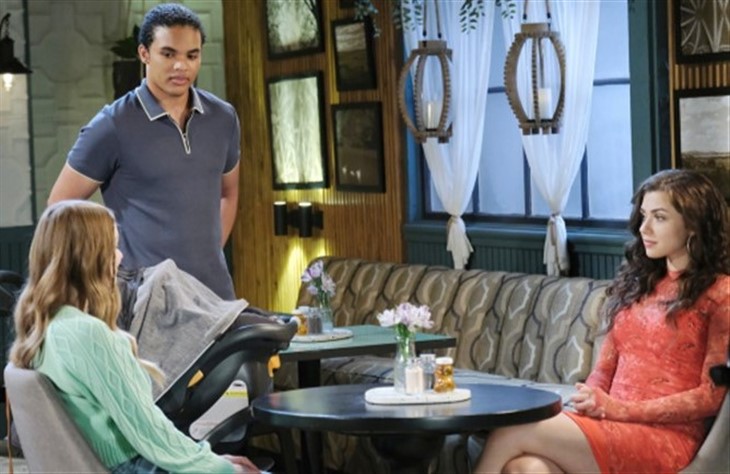 Days of Our Lives spoilers reveal that Theo Carver (Cameron Johnson) gets his heart broken. Ciara Brady (Victoria Konefal) finally remembers her love for Ben Weston (Robert Scott Wilsson). Theo might turn to his ex, Chanel Dupree (Raven Bowens). However, there is another man who is interested in Chanel, which just happens to be Johnny DiMera (Carson Boatman).

DOOL spoilers reveal that the Olympics cliffhanger will most likely be Ben kidnapping Ciara from her own wedding. When Theo lifts the veil off of his bride, he will discover that it’s not Ciara, the woman he is supposed to be marrying. Instead, it will likely be Claire Brady (Isabel Durant), who is determined to help “CIN” reunite.

Days of Our Lives fans have been promised by head writer Ron Carlivati that fans will get the payoff they have been wishing for. Plus, Konefal recently confirmed that Ben and Ciara will have a happy ending. So, her memories will probably return when the soap returns from the hiatus.

When Ciara finally remembers her love story, she will have to tell Theo that the wedding is off. She won’t want to break his heart, but she can’t marry him when her heart belongs to Ben. The young man will be absolutely heartbroken. This is exactly what Abe Carver (James Reynolds) was trying to prevent. Unfortunately, Theo refused to take his father’s advice. So, what happens with Theo now?

Days Of Our Lives Spoilers – Turning To Chanel Dupree

Days of Our Lives spoilers reveal that Theo might turn to his former flame, Chanel. Recently, Chanel was dealing with her own heartbreak when Allie Horton (Lindsay Arnold) chose Tripp Johnson (Lucas Adams). Chanel and Theo ran into each other and the young woman suddenly planted a big kiss on her ex-boyfriend. He told her about his engagement, but don’t expect these two to try again after “CIN” reunites.

Around the time that Ben and Ciara reunite, Johnny will be arriving in Salem. It is teased that Johnny will be intrigued by Chanel. She will probably be interested in him, as well. However, when Theo suggests that they give romance another try, it will set up Chanel with a brand new love triangle.

We haven’t seen Johnny in many years, but there is a chance that he might be a lot like his father, EJ DiMera (Dan Feuerriegel). If this is the case, he’s not going to accept rejection. He might do what is necessary to get the girl he wants. The real question, though, is which guy does Chanel really see herself with? We will have to keep watching the NBC soap to find out.