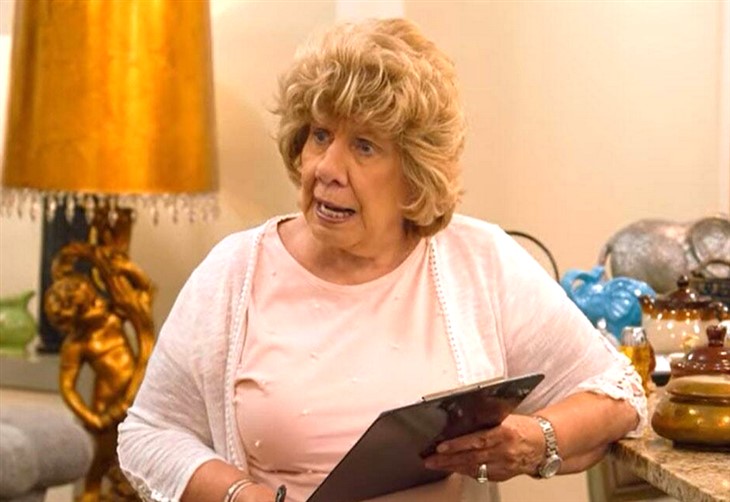 Chrisley Knows Best fans love Nanny Faye and those who criticize her meet with the wrath of USA Network fans. Well, that doesn’t mean that sometimes, fans don’t feel a bit confused by the mixed messages on the show. Savannah, Todd, Julie, and Chase often talk about forgiveness and love, and Christian values. Especially when it comes to the estrangement of Lindsie from the family. Now, fans wonder why on earth the show reveals things like tarot cards and crystal balls.

Fans of the show know that Nanny Faye likes to run her own little side hustles. Plus, she enjoys a flutter on the horses. Furthermore, fans saw that she likes casinos. Actually, she’ll put her money down at the drop of a hat. In July this year, fans saw that Savannah shared a clip of her grandma putting her money on Britney Spears getting free of her father’s influence and control. Meanwhile, if she gambles and loses, maybe that accounts for her recent turf war with a little boy over who could sell their goods where.

Chrisley Knows Best fans saw in a previous season of the show, that Savannah and Grayson took Nanny Faye for a tarot reading. That came when they decided a negative prediction might convince her to give up her gambling addiction. Clearly, that failed as she still seems as keen as ever on betting her money. Actually, fans agree that she’s hilarious, jolly good fun, and entertaining. In fact, many of them hope they grow into such a fun-loving old lady. Still, some fans wondered a bit about the foray into the occult.

Nanny Faye was featured in a teaser for Season 9 of the show. In it, a brief scene revealed her all dressed up like a fortune teller. In front of her, there sat a crystal ball. Then, in a mysterious voice, she intoned that she sees a “dark cloud coming.” Of course, fans reacted with laugher. It tuned out that the scene came outside of her house. Initially, fans thought she predicted that Todd and Julie might actually split. However, that was not the case. 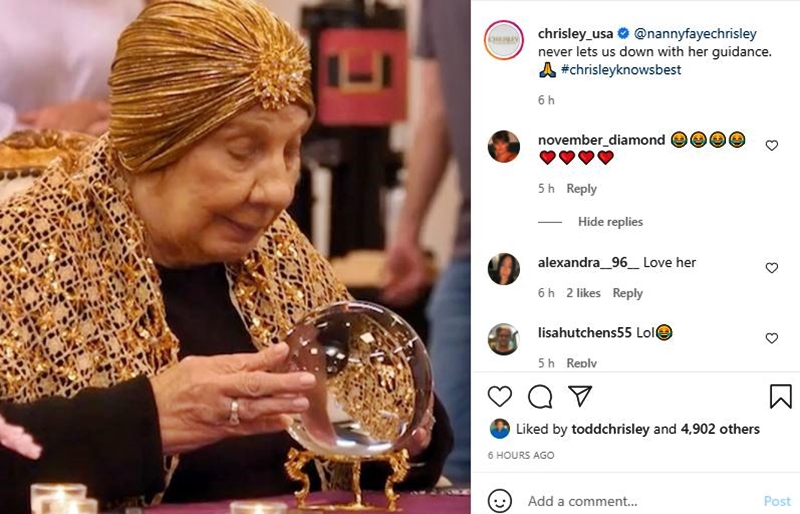 More Chrisley Knows Best spoilers revealed that it was just another side hustle for her. The USA Network explained that Todd’s mom had been masquerading as a fortune teller at the local senior center. Again, it sounds hilarious and so typically Nanny Faye that fans seemed hugely amused. Well, on Wednesday, September 15, ahead of Thursdays’ show, Christeky USA popped up another photo of her with her crystal ball. The caption read, “@nannyfayechrisley never lets us down with her guidance. 🙏.”

One person who follows the show and Nanny Faye’s antics wrote, “She’s a firecracker for sure! ❤️” Then another fan commented, “Oh Lawd, I’m scared to see where this is going. 🤣” However, one very confused fan asked, “What’s the deal lately w this family and crystal balls, the [tarot] cards?? I really didn’t see this family doing that kinda stuff!” What are your thoughts on it? Sound off in the comments below.

Be sure to catch up on everything happening with Nanny Faye right now. Come back here often for more Chrisley Knows Best spoilers, news, and updates.