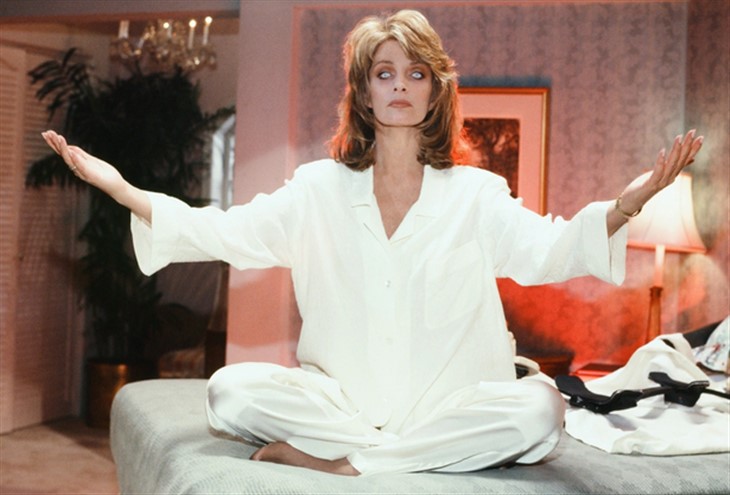 Days Of Our Lives (DOOL) spoilers and updates reveal some viewers were hoping it was only a rumor but the devil will pay a return visit to Dr. Evans this week. It’s also looking like the alleged Alzheimer’s storyline will be might be sidelined.

It was 27 years ago when Dr. Marlena Evans was found to be possessed by the devil. For a long, time the residents of Salem were not aware of what was going on. This Friday, September 17 history will repeat itself as Doc encounter Satan, for a second time. There is some confusion, however regarding how this storyline will manifest.

Spoilers had been saying that Alzheimer’s disease was going to be the explanation for why Doug Williams, (Bill Hayes) behavior was off but now some are saying that he is possessed by the devil and when Marlena tries to help him the evil will choose her as the new host. What is not known at this point is whether or not Doug will go back to normal after the demon leaves him for Dr. Evans or if he is truly dealing with dementia.

Days Of Our Lives Spoilers – Is There Room For Both Storylines?

Spoilers suggest that there may not be room for two big storylines on Days of Our Lives but General Hospital and The Young And The Restless both had characters with Alzheimer’s and it did not cause any of the other storylines to be placed on the back burner. The dementia plots were integrated with what was already going on.5

DOOL Spoilers – No Limit To The Evil

According to Entertainment Weekly, there will be many unexpected twists and turns to the possession this time around and no one is safe. Former Salem residents will return to lend their assistance but there will be no limit to the evil this fall.