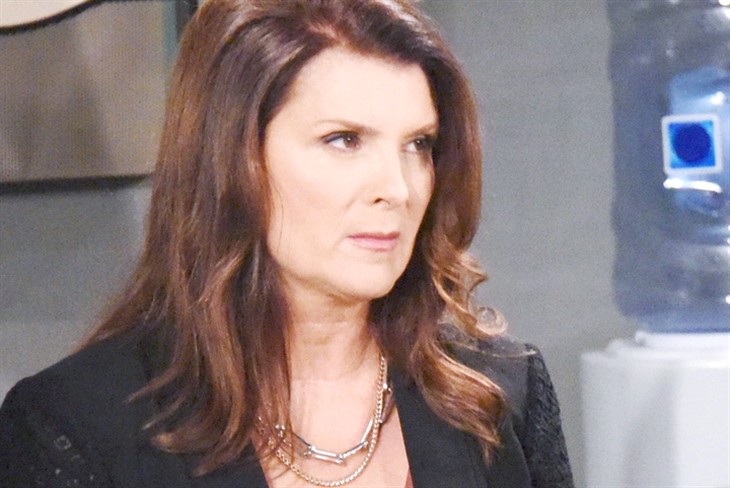 Bold and the Beautiful Spoilers hint that Sheila Carter (Kimberlin Brown) will play a bigger role in upcoming episodes and that she may target the Forresters. The recent reveal of Sheila being the birth mother of Finn Finnegan (Tanner Novlan) was a surprise and shocking news for the Forresters.

According to The Bold and the Beautiful spoilers, Sheila says that she turned over a new leaf and that she would leave now that she knew that she was not welcome by the Forresters. However, it seems that she may have other ideas now and that she may not have changed as much as she let on.

When Sheila decides to leave on The Bold and the Beautiful, she decides not to keep her distance from Finn just yet as she decides to reach out to him. She gets his number by tricking the receptionist from the doctor’s office.

B&B Spoilers – Sheila Carter Wants A Relationship With Her Family

After she learns how to contact Finn, she reaches out with a goodbye text. Finn who is still conflicted about not having a relationship with his mother decides to at least respond to the message with a heart. It seems that Shelia takes the message as a reason to stay.

In recent The Bold and the Beautiful episodes, she becomes more convinced that she should try to gain a relationship between her and her son. However, this may lead to her causing more trouble in upcoming episodes. It is no secret that the Forresters do not want her anywhere near them.

Knowing that Sheila is determined to be a part of her son’s life, what steps might she take in order to make that happen? Also, Finn reached out and has not told any of the Forresters about it. Instead, actively keeping it a secret from them. So how might they react to the news that his message played a part in Sheila deciding to stay behind instead of leaving?