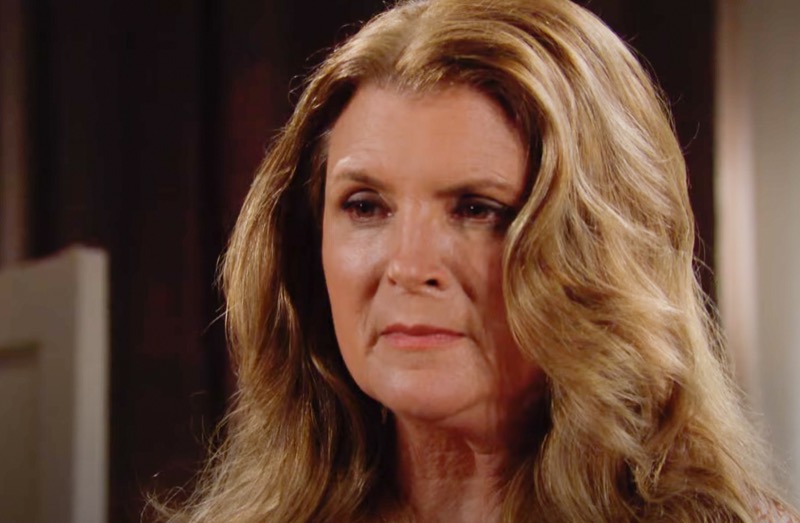 The Bold and the Beautiful (B&B) spoilers for Monday, August 23, 2021, reveal in Los Angeles Sheila Carter being Sheila Carter in every way. She has something to hold over Jack’s head and intends to use it to her advantage.

The Bold and the Beautiful Spoilers: Sheila Carter Is Up to Her Old Tricks

Sheila (Kimberlin Brown) is not happy that Jack Finnegan (Ted King) is ordering her to stay away from her son and grandson. She stuck to their agreement for years and never made contact with their son, but seeing him marry Steffy Forrester (Jacqueline MacInnes Wood) of all people made her have to see Finn (Tanner Novlan) and get to know him. And she especially wants to know her own grandchild.

So, Sheila tells Jack to fess up to his own sins. Tell Li and Finn all about their affair and the fact that Jack is Finn’s biological father. After all, the man thought he was being raised by an adoptive father all his life. Doesn’t he deserve to know the truth now that he knows who his biological mother is?

Jack is too chicken to do it, claiming people will be too hurt. Well, too bad. If Jack isn’t going to do what Sheila tells him to do then she is certainly not going to do what Jack tells her to do. Sheila wants what she wants and nobody is about to get in her way.

Ridge and Brooke Take Some Time For Each Other

Ridge (Thorsten Kaye) and Brooke Forrester (Katherine Kelly Lang) may not have a storyline, but at least they have each other. In fact, the last time they had a story of their own was when Ridge believed he was married to Shauna after a drunken stupor in Las Vegas.

Since that debacle ended, all this pair has done is worry about their kids and butt into their lives whether their kids wanted it or not. But now that Steffy is kind of safely married to Finn and away from Liam (Scott Clifton), Brooke is thrilled. She doesn’t have to worry about Hope (Annika Noelle) anymore. Thomas (Matthew Atkinson) is even doing well so Ridge doesn’t have to worry about him anymore either. So, Monday is some ‘Bridge’ time as they take some time to reconnect and bring on the romance. Stay tuned to The Bold and the Beautiful weekdays to see how these stories play out.