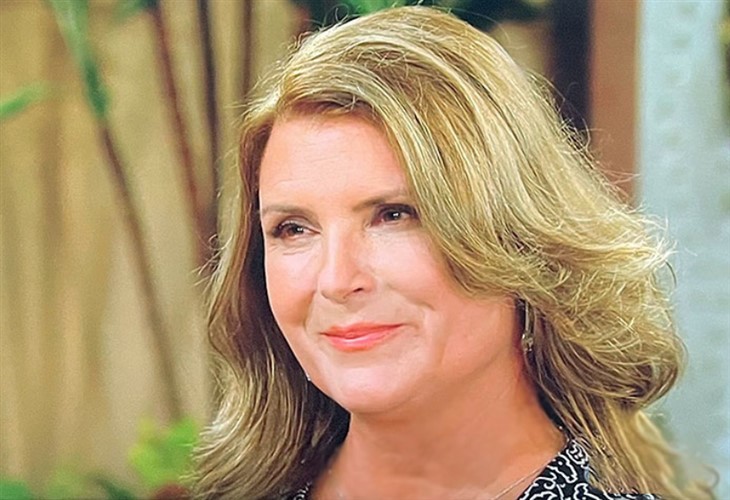 The B&B Spoilers has the streets buzzing in the world of the CBS soap The Bold and the Beautiful. All fan ears are to the ground. What will Sheila Carter (Kimberlin Brown) do next? Out of the blue she is now the birth mother of Dr. Finn Finnegan (Tanner Novlan). I guess for the B&B writers there is no limit to how high in the drama-filled sky they will go to keep us watching. And guess what? It’s working. At least for us REAL B&B fans it is.

The Bold And The Beautiful Spoilers – 9 Lives and More

The Bold and the Beautiful spoilers tease Sheila (Kimberlin Brown) has gotten her foot in the door of the Forrester world by exclaiming birth mom rights about Finn (Tanner Novlan). Now she will try squeezing her whole body in by using the next underhanded trick in her playbook. I will say this, Morris the cat and his 9 lives just cannot compete. She Cat Sheila has so many lives it is pathetic. And this time she has come back with a doozy.

B&B Spoilers – Jack Finnegan Jacked Up by Sheila She Cat

The Bold and the Beautiful spoilers are indicating if your name is Jack Finnegan ( Ted King ) and you have been keeping BLOCKBUSTER secrets then you have some explaining to do. According to B&B spoiler rumors Jack will fall into the paws of She Cat Sheila Carter (Kimberlin Brown) and that is a terrible place to be as we and the Forresters well know. Sheila is all up in Jack’s secrets and B&B spoilers tease she will blackmail him for leverage in her desire to firmly attach herself to Finn and the Forresters

The Bold and the Beautiful spoilers say that what Sheila (Kimberlin Brown) has on Jack Finnegan ( Ted King ) is enough to cause major shockwaves. However, the B&B spoilers are not spilling the tea on that just yet. So, you know what that means…we CBS Bold and the Beautiful fans are left to our own conclusions for now. All I know is that the suspicious glances Jack keeps directing towards Sheila speak volumes and that tells me she has him by the short hairs (OUCH). You had best believe Sheila will not be turning those short hairs loose until she gets what she wants. And even then, knowing how Sheila rolls, she might just yank Jack’s short hairs out for spite.

What is Jack Finnegan hiding? Was he cheating on his wife? How is he connected to Sheila Carter? Is Jack Finnegan the real father of Dr Finn (Tanner Novlan)?

We will just have to keep watching and waiting for the B&B Spoilers to tell us more. What are your thoughts? Feel free to share your comments. We love it when you do.

Keep checking back often to stay on top of everything happening with B&B right now. Here you will always find The Bold and the Beautiful spoilers, news, and updates.