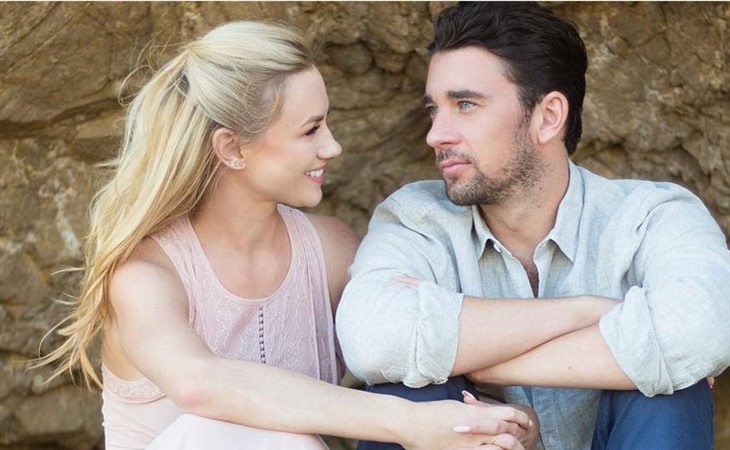 Days of Our Lives (DOOL) spoilers indicate that Billy Flynn who plays Chad Dimera, and his wife Gina Comparetto are expecting their first child. Congratulations to the happy couple.

Days of Our Lives’ Chad is no stranger to fatherhood, he is onscreen wife, Abby Dimera (Marci Miller) already has two children. However, Billy and his wife of five years have just announced that they are expecting their first child alone with some photos from a cute maternity shoot.

Gina shared the photos on her Instagram with the opening “First comes love, then comes marriage, then comes a (baby emoji)… Gina goes on to thank “@jessieco_photo for the pictures and @makeupmaryann for the gorgeous, 60s-inspired hair & makeup.” The photos are gorgeous with some incredibly cute poses. There is no mention of the baby’s gender at this time. Congratulations are pouring out from fans on the post who want to wish the family well. Everyone is very excited for the couple and their child.

Days of Our Lives’ Billy Flynn was recently on Maurice Benard’s (Sonny Corinthos) podcast State of Mind. Billy talked about addiction and how he almost lost everything but came out on the other side. Flynn discussed how he felt that he was born with anxiety and resentment. However, Flynn now relies on his spirituality instead of alcohol to get by. Benard and Flynn bonded over their struggles and became fast friends.

Benard is thrilled for Billy and Gina and feels that he will be a great father. Maurice congratulated the couple as he retweeted Flynn’s announcement about the pregnancy saying, “Billy Flynn is gonna be a daddy. The humor that child is gonna have. The wit and the charm. Congrats to Billy and Gina. Happy for both of you!!!”

On Days of Our Lives, Flynn’s alter ego is dealing with his brother E.J. Dimera (Dan Feuerriegel) forcing his way into the movie opposite Abby. E.J. and Abby had an affair years ago so this is not settling well with Chad. Chad and Abby have had their ups and downs for some time.

Abby has also cheated on Chad with his brother Stefan Dimera (ex-Brandon Barash). Chad and Abby have to deal with E.J. causing problems in their marriage and try to move past that. Things are about to get worse now that Marlena Evans (Deidre Hall) is possessed and Abby is playing her in the movie. Unfortunately, Chad and Abby can’t have a little bit of peace.

Our congratulations to Billy and Gina on the new baby. We wish the family all the best. Be sure to catch up on everything happening with DOOL right now. Come back here often for Days of Our Lives spoilers, news, and updates.

Kimberlin Brown Teases Sheila Explosion On The Bold And The Beautiful