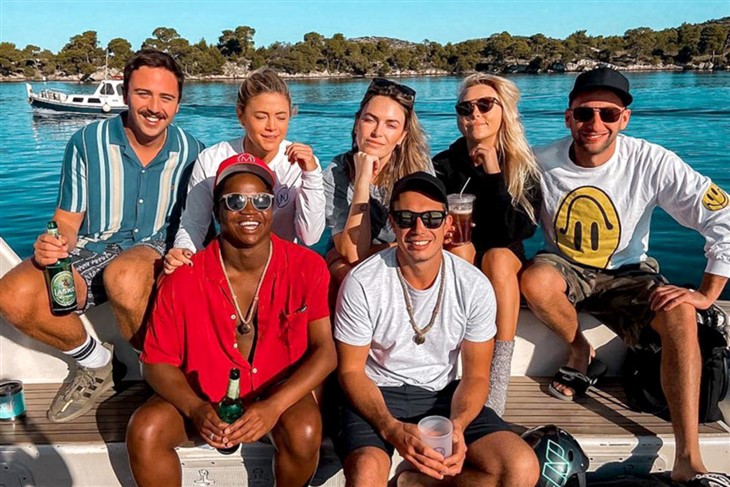 What happened with the Below Deck Med crew in Croatia?  In the most recent clip from the October 18 episode of Watch What Happens Live, host Andy Cohen immediately and eagerly came with the questions, asking Mathew Shea directly, “Who hooked up in Split?”

As Below Deck Mediterranean season 6 comes to an end, don’t expect that “that’s all folks,” because the crew took off to Split, Croatia for some much-needed R & R and Bravo got the skinny on what went down there.

Below Deck Mediterranean – A Bracelet Shop Or A Sex Shop?!

Seemingly dodging Cohen’s pressing question Shea said he didn’t even remember [who hooked up in Split].
Dodging further he said, “But it was a good time. Malia took us to the best bracelet shop.”

Andy interrupted, saying, “you said it was like a sex shop and now you’re telling me about a bracelet shop?”

After some nervous laughter from the Below Deck Med crew, Mathew finally answered saying, “I saw everyone naked, I’m just saying that.”

In the clip, Courtney Veale tells the cameras that there were a few things that” definitely happened that will never be spoken of again.”

In a sort of “What happens in Vegas” manner Lloyd chimed in, saying, “Only the people that are there are ever gonna know.”

Katie Flood solidified the vague Vegas reference finishing off with, “What happens in Split stays in Split.”

Below Deck Mediterranean – We Just Enjoyed Each Other’s Company Again’

Below Deck Med chief stew Katie Flood placed a much more PG-rated spin on what went down, saying, “We had, honestly, a good time,” adding, “We partied a lot, and we just enjoyed each other’s company again.”

Fans got the impression that Courtney and Mzi Dempers might hook up in Split, the reality TV stars confirmed on WWHL that they were “still just good friends.”

But we discover, there was romance to be had in Split, when Andy asks who else, “besides the on-camera crew” was there.

As it turns out, Lady Michelle’s engineer, Jake, was in the fray in Split as well.

As fans know, Malia White and Jake have recently become an item and it appears that isn’t soon to change.

“Well, I mean, obviously we needed an engineer there,” the Below Deck Med joked.

The WWHL host then asked if that was when her “relationship with the engineer really took off,” and she confirmed that it was true.

After a rough season with a few crew members leaving the boat, it is inspiring to know that this crew is now solid.
All the crew confirmed that each of them still speaks to one another every day.

The season is over, but if you want more Below Deck, you can binge-watch it on Peacock.