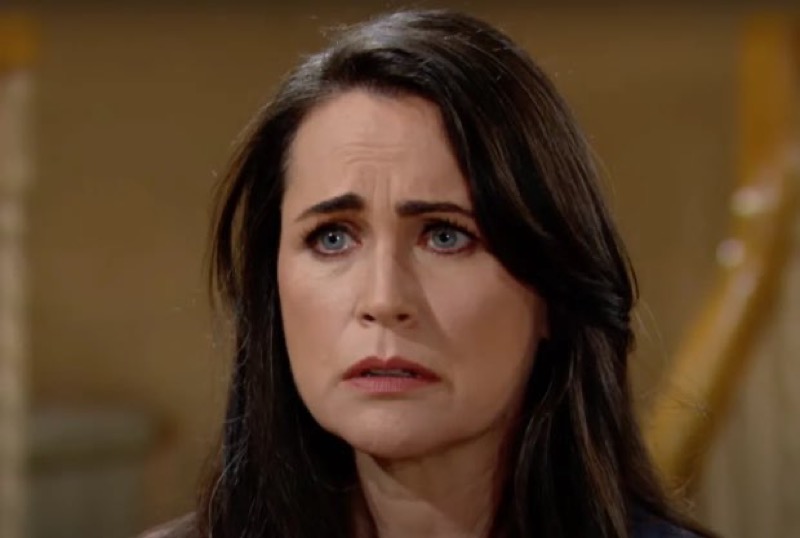 The Bold and the Beautiful (B&B) spoilers for Thursday, August 19, 2021, reveal Quinn in the middle of the biggest dilemma of her life.

The Bold and the Beautiful Spoilers: Can Quinn Leave Carter Behind?

Quinn (Rena Sofer) never expected to fall in love with Carter Walton (Lawrence Saint-Victor) but that’s exactly what has happened. She also never expected she’d betray Eric (John McCook) and have an affair with him so the love part is doubly surprising. It was an affair she never intended to happen and it never should have developed into feelings but it did.

Eric now deciding to forgive her and take her back has added to Quinn’s shock. What does she do? Carter told her she has to go back to Eric because Eric loves her and he knows she still loves him and Quinn had to admit that was true. On Thursday, she also has to admit that she loves Carter, too. And he loves her and now neither one of them are sure what to do. They don’t want to be without one another but how could they hurt Eric? Perhaps ripping the Band-Aid would be the best idea because keeping the last few weeks a secret won’t go well.

The Forresters Go To War With Sheila

So what if Steffy (Jacqueline MacInnes Wood) assured Ridge (Thorsten Kaye) that there was no way that Finn (Tanner Novlan) would go behind her back and make contact with Sheila Carter (Kimberlin Brown). She completely trusts her new husband but boy is she wrong. Finn just can’t help himself. First, he responded to her text with an emoji and on Thursday, he wants to see this woman who claims she gave birth to him.

Sheila sees an in and she is determined to take it. From the start, Sheila has had an obsession with being a mom and Finn looks to be just another one of her many offspring. The Forrester family is already making contingency plans, however. They are taking out a restraining order that might make reunions more difficult. Will Finn stand for it? If he wants his marriage to Steffy to last, he better. Stay tuned to The Bold and the Beautiful weekdays to see how these stories play out.