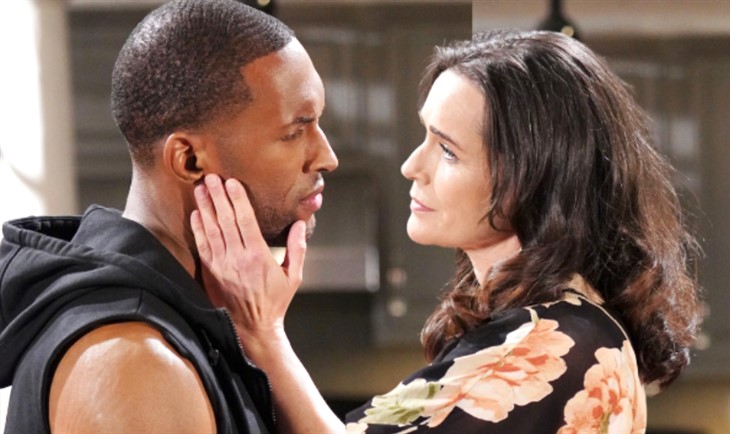 The Bold and the Beautiful (B&B) spoilers tease that Carter Walton (Lawrence Saint-Victor) and Quinn Fuller (Rena Sofer) will exchange love declarations as they face a huge decision. After Eric Forrester (John McCook) pushes Quinn to get back together and fix their marriage, it’ll complicate Quinn’s secret romance with Carter even more.

During the week of August 16-20, Carter will mull over the terms he agreed upon. He obviously hasn’t done a great job of staying away from Quinn like Eric demanded! Eric was adamant that Carter could have no relationship of any kind with Quinn, so Carter would be in big trouble if Eric knew the truth.

However, Carter just can’t help himself when it comes to Quinn and this magnetic pull between them. Carter knows he could blow his second chance with the Forresters and potentially lose his job if his connection to Quinn comes to light.

The Bold And The Beautiful Carter Walton Wants To Go Public

Even so, Carter will consider going public with his relationship and letting the world know how he feels about Quinn. He’ll be tired of treating Quinn like a dirty little secret and will want a real future with her, so it’s reasonable to consider taking this public step.

Meanwhile, Quinn will be all set to sign the divorce papers and put this chapter with Eric behind her. That’s when Eric will stun Quinn by insisting he’d like to give things another shot between them. After being reminded of what a nightmare Sheila Carter (Kimberlin Brown) is, Eric may realize Quinn wasn’t so bad after all!

B&B spoilers say Quinn will agree to consider Eric’s reconciliation request, which means she’ll have to tell Carter. Faced with the possibility of losing each other, Quinn and Carter will profess their love for each other. They previously weren’t sure exactly what it was they felt, but they’ll soon decide it’s indeed love.

Will love be enough to convince Carter and Quinn they should stay in this new relationship? It may not be quite that simple according to Bold and the Beautiful spoilers, but Quinn and Carter will savor this moment of their profound connection as they face one of the most difficult choices of their lives.

We’ll offer updates as other B&B news becomes available. It sounds like some great drama’s ahead for Quinn, Carter and Eric. SOS’s your go-to source for sizzling Bold and the Beautiful spoilers, updates and news, so stop by frequently.