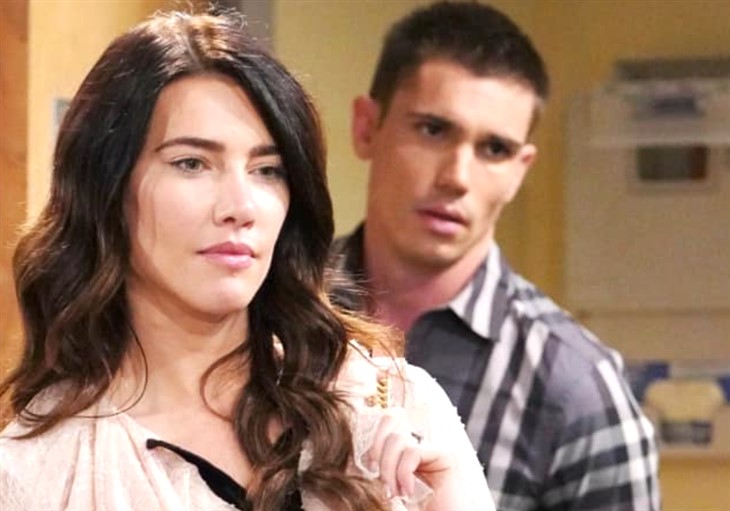 The Bold and the Beautiful (B&B) spoilers for Wednesday, September 15, 2021, reveal in Los Angeles Steffy more determined than ever to save herself and her family from the crazy lady that is Sheila Carter.

The Bold And The Beautiful Spoilers – What Will Steffy Forrester Do?

Sheila Carter (Kimberlin Brown) thought she had solved her own problem. She tried faking a heart attack and got Finn (Tanner Novlan) to call her “Mom” but she couldn’t keep her to himself. Instead, he chose Steffy (Jacqueline MacInnes Wood) and his son because there was no way he could have his new kinda-sorta wife and the woman claiming to be his birth mother.

Steffy is relieved that Finn chose her and wants to keep their happiness but she knows with Sheila in their life, that will ultimately be impossible. Plus, she knows how dangerous she is. Therefore, Steffy plots and plans to do anything to keep Sheila away. Will whatever she plans work? Sheila has a way of doing crazier things than Steffy has ever done in her life to get what she wants. Steffy knows what this woman did to both her mother and her stepmother and she is willing to put her life on the line to make sure she doesn’t ruin the good life she fought so hard for.

Quinn (Rena Sofer) managed to convince Carter (Lawrence Saint-Victor) that they just couldn’t take Eric (John McCook) up on his offer — although it was really quite tempting. Was Eric just trying to test his wife? He didn’t end up going to sleep alone, so he knows what did NOT happen in his living room? (Did he really expect them to do the deed in his house?)

Despite the fact that they agreed Eric’s idea was crazy, Quinn and Carter encounter one another again on Wednesday — and have to resist each other again. Can they do it? Will they do it? It’s not like Eric actually rescinded his offer and they can always have each other if they want each other? It looks like that is exactly what Carter wants and it’s surprising how much Quinn has changed that she doesn’t just go for it. If they do give into passion, will that free Eric up for a relationship with Donna (Jennifer Gareis)? Or at least an emotional relationship? Stay tuned to The Bold and the Beautiful weekdays to see how these stories play out.