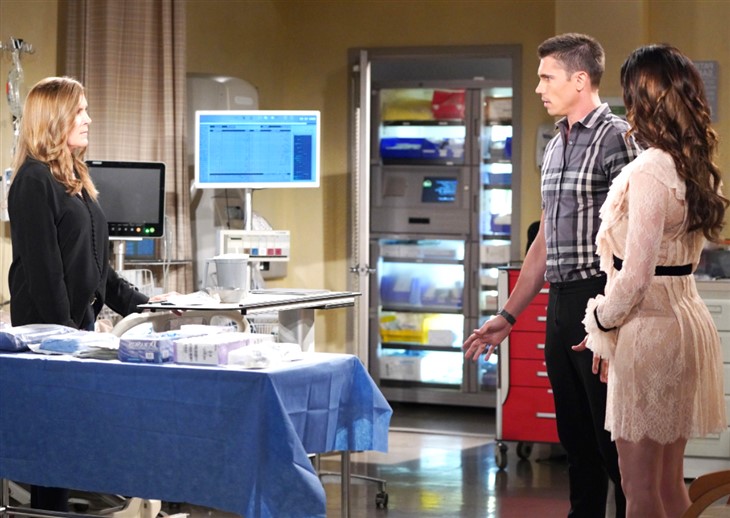 The Bold and the Beautiful (B&B) spoilers tease that Sheila Carter (Kimberlin Brown) has stirred the pot ever since flying back to town on her broom. She is apparently the biological mom of John “Finn” Finnegan (Tanner Novlan), but to date everyone has taken her word as the gospel truth. Which is strange given that on soaps DNA tests are a dime a dozen, even if they are mostly rigged and wrong anyway.

Could it be that Steffy Forrester (Jacqueline MacInnes Wood) gets wise to the witch and sneaks a DNA test between Sheila and Finn?

Poor Finn isn’t even officially married to Steffy even though they had the ceremony and said ‘I Do.’ That’s because Sheila interrupted the after-party to divulge that she is Finn’s biological mother. This was backed up by Finn’s supposed adoptive father Jack Finnegan (Ted King) who fans now know is actually Sheila’s baby daddy.

One sight of Sheila Carter and everyone went berserk and in the end Steffy chose not to file the marriage cert like she should have.

B&B Spoilers – Sheila Carter is a Wild One

Steffy is adamant that Sheila have nothing to do with Finn nor their baby Hayes. That is easier said than done however, as Finn has a blind spot in regard to Sheila. He went behind Steffy’s back and handed over Hayes for her to hold, something Steffy laid eyes on herself.

Steffy laid down the law and demanded that Finn never talk to Sheila again. Except that he texted her a heart emoji and Sheila showed this to Steffy who went and had cows all over again when she realized Finn betrayed her.

Poor Finn wants to have a relationship with his mom, even though she is a psycho killer that everyone rains hate down upon. He treasures his DNA connection to her, but what if a DNA test reveals Sheila is not his mom?

This is something Steffy could be planning, and if she does, who’s to say the results will be correct? Steffy could choose to keep the truth to herself if it suits her. She is fearful that her son has Sheila’s DNA, would she lie about about that to make Sheila go away for good?