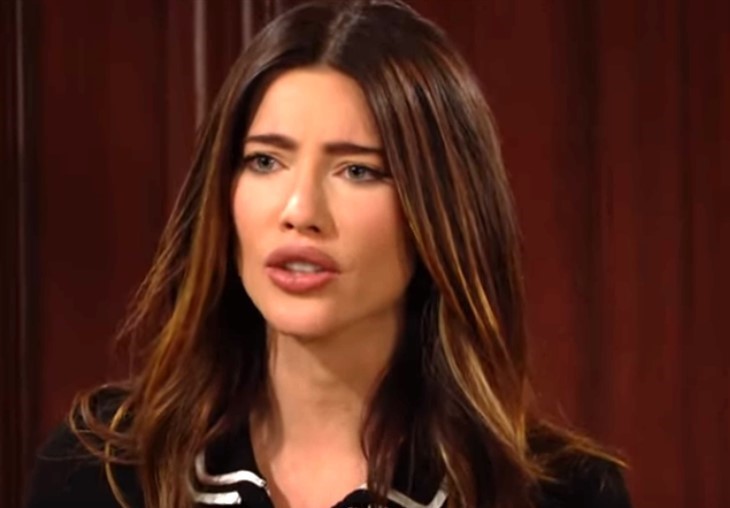 The Bold and the Beautiful (B&B) spoilers for Thursday, August 26, 2021, reveal Finn reeling at his father for suggesting he ever see Sheila Carter again.

Steffy (Jacqueline MacInnes Wood) was uneasy about taking a business trip with Hope (Annika Noelle) and leaving her new baby. Adding to the discomfort is learning her new mother-in-law is the one and only Sheila Carter (Kimberlin Brown), the crazy woman from way back who has been torturing her family for decades. Before that, she tortured Lauren Fenmore (Tracey Bregman) in Genoa City. Hope could see the discomfort all over Steffy’s face as they flew to the other side of California.

During that time, Sheila was manipulating her way back into Finn’s (Tanner Novlan) life, winning a chance to see her grandson. Steffy should have known that’s what she’d see when she got home and walked through the door, but apparently, she didn’t. And nothing could prepare her for her feelings when she takes one look at her living room and sees Sheila Carter holding her infant son.

Needless to say, Steffy goes absolutely ballistic wondering how on earth Finn could have allowed this to happen. She warned him over and over again that he had to make sure Sheila could never be a part of their lives and the second she turned her back, Sheila Carter was welcome in her house. What a betrayal by her new husband. Is this marriage over before it even really begins?

Speaking of betrayal, Ridge (Thorsten Kaye) and Brooke (Katherine Kelly Lang) are stunned when Eric (John McCook) tells them he forgave Quinn for sleeping with Carter (Lawrence Saint-Victor) and betraying their marriage vows. They might actually be more outraged than Steffy that Eric allowed this woman back into their lives and their family. They never wanted her there to begin with and can’t understand how Eric can be so understanding.

Does he bother telling them about the real reason he and Quinn had not been sleeping together, which led Quinn into Carter’s arms? Or is that the kind of thing that really should stay between a husband and wife. Ridge and Brooke want answers, but will anything Eric tells them be enough to calm them down and allow him to live his own life? Or does he have yet another secret to reveal to these two? Stay tuned to The Bold and the Beautiful weekdays to see how these stories play out.