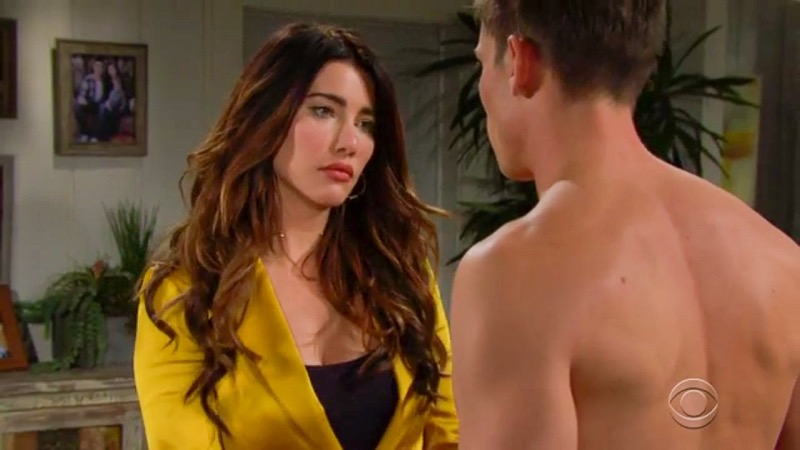 Viewers of The Bold and The Beautiful will recall that Finn was warned not to have anything to do with his birth mother. Not only Steffy and her family, but his own father, Jack Finnegan (Ted King) warned him as well, along with a stern warning to Sheila herself to leave Los Angeles and never come back! Viewers of The Bold and The Beautiful who are longtime fans know that Sheila is not as innocent and loving as she claims to be, and there is good reason for Finn not to have anything to do with her. Sheila is a very dangerous and maniacal woman, she suffers from psychopathy and delusions, and those who really know her can see that she has not changed. She always makes her approach claiming she has changed and only wants a chance to prove herself!

Viewers of The Bold and The Beautiful can tell that Finn is a lot like Eric Forrester (John McCook). Both men give people way too many chances to start again and to prove that they have changed. Recently, Eric took back Quinn Forrester (Rena Sofer) and tore up his divorce papers and she wasn’t even sure she wanted to come back! But viewers of the Bold and The Beautiful can pretty much tell she and Carter Walton (Lawrence Saint-Victor) are probably still not going to be able to stay away from each other for long!

Finn started with a heart emoji in response to Sheila’s text, and he didn’t even question how she got his private number! Sheila, of course, read way more into that emoji than she should have, although a heart does mean love. Finn probably meant it as sympathy although he does give her the benefit of the doubt in spite of what he has been told about her!

Viewers of The Bold and The Beautiful know that one thing leads to another for Finn where Sheila’s concerned, and now there’s trouble! Sending her a heart emoji led to a lie which he begged Paris Buckingham (Diamond White) not to reveal to Steffy. Steffy strictly forbad him to have ANYTHING to do with Sheila, and now she’s cajoled Finn into letting her have a visit with the baby!

Steffy has been out of town on a business trip with Hope Logan Spencer (Annika Noelle) and was worried the whole time if there would be Sheila problems when she returned. Longtime viewers of The Bold and The Beautiful know that Steffy has a definite case of post-traumatic stress disorder, or PTSD, when it comes to Sheila. When Steffy comes home and sees Sheila holding her baby – she feels betrayed, confused, frustrated, and angry! Steffy cannot see any good side to Sheila, and in her mind she feels that Finn has betrayed her. She has no empathy for Finn seeing Sheila as his mother, and his feeling of empathy for Sheila puts him in the same category as far as Steffy is concerned! Steffy goes ballistic!