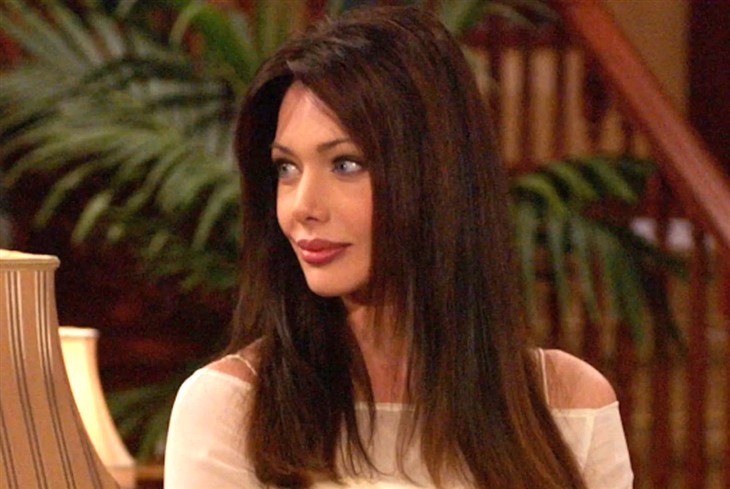 The Bold and the Beautiful spoilers reveal that Taylor Hayes (Krista Allen) is returning. With Jack Finnegan’s (Ted King) marriage in shambles and Sheila Carter (Kimberlin Brown) searching for love, could there be an unexpected love triangle? Could Taylor and Sheila both fight over Jack? If so, which woman could he end up choosing?

The Bold And The Beautiful Spoilers – Jack Finnegan’s Ruined Marriage

B&B spoilers reveal that Sheila urged Jack to tell Li Finnegan (Naomi Matsuda) and John “Finn” Finnegan (Tanner Novlan) the truth. Jack told Li first and she was furious, heartbroken and shocked all at the same time. Then, Li pushed Jack to confess to Finn that he was his biological father. The Finnegan family is in shambles right now and Li doesn’t want to see anyone, including Jack.

Throughout Brown’s many interviews since her return to the CBS soap, the actress has repeatedly talked about change and love. Fans have a hard time believing Sheila has really changed. Considering that Sheila keeps manipulating and scheming, it’s no surprise that viewers think she’s still a villain.

In one interview, Brown said that she hopes Sheila could find someone who will really love her. The actress noted that’s all Sheila has ever wanted. Brown told SoapCentral,

“One of these days, she will be able to find love and be loved the way she had always hoped. And her son might be the beginning of that.”

The Bold And The Beautiful Spoilers  – Taylor Hayes Shakes Up Soap

The Bold and the Beautiful spoilers confirm that Taylor is coming back. Hunter Tylo was not available, so the role was handed to Krista Allen. It is teased that Taylor will return and be a pillar of strength as her children’s lives spiral out of control. Taylor will also meet Jack, which could set up a brand new romance.

It seems that the soap is running a “going back in time” theme. Brooke Logan Forrester (Katherine Kelly Lang) might end up with Deacon Sharpe (Sean Kanan), giving Hope Logan Spencer (Annika Noelle) the family she’s always dreamt of. Meanwhile, Jack and Sheila could end up in a relationship, which would be interesting. However, it would make Sheila’s dream come true of becoming a “real family” with Finn. Hope and Liam Spencer (Scott Clifton) will go through some struggles, but will likely patch things up.

Then we have Bill Spencer (Don Diamont), who is determined to win back Katie Logan (Heather Tom). Finally, there is Eric Forrester (John McCook), who will probably end up rekindling his romance with Donna Logan (Jennifer Gareise). Sure, Quinn Forrester (Rena Sofer) might have banished Donna for now. With that being said, fans are pretty sure Eric and Donna will eventually find themselves back in each other’s arms.

So, it seems that a love triangle for Jack is definitely possible, but Sheila might end up winning his heart. So, where does this leave Taylor? Perhaps she will get Ridge Forrester (Thorsten Kaye) back when the actor returns from his six-month break. That would certainly make Thomas Forrester (Matthew Atkinson) and Steffy Forrester Finnegan (Jacqueline MacInnes Wood) happy! We will just have to wait and see what the writers have planned.