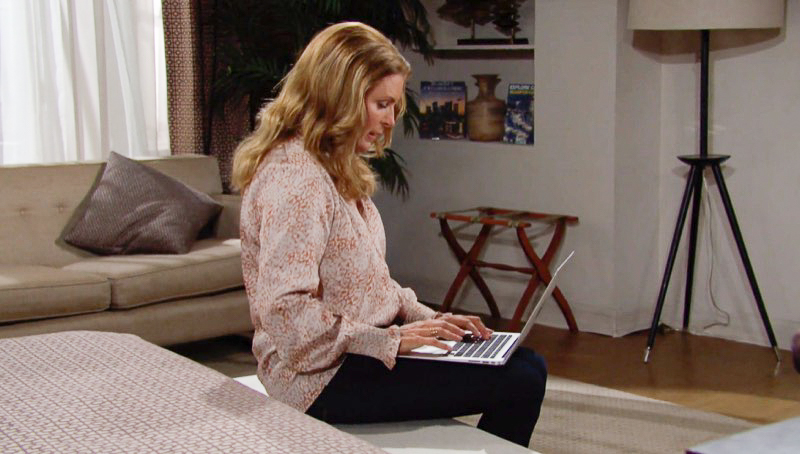 The Bold and the Beautiful spoilers reveal that Sheila Carter (Kimberlin Brown) blackmails Jack Finnegan (Ted King). It is confirmed that Jack is John “Finn” Finnegan’s (Tanner Novlan) real father. However, Jack’s bombshell secret must be more than a one-night stand with a sociopath. Could Jack and Li Finnegan’s (Naomi Matsuda) adoption be illegal and will it complicate things?

B&B spoilers reveal that during the week of August 23, Jack will confront Sheila. He warns her to stay far away from Finn, Steffy Forrester (Jacqueline MacInnes Wood) and their baby. However, Sheila fires back by blackmailing Jack with something he’s still hiding from everyone. This will put Jack in a really difficult spot as he determines what should be done.

It is confirmed that Finn is Jack’s biological son. However, did he actually cheat on Li with Sheila? Or did she steal Jack’s sperm in order to have another child? With this villain, nothing is off-limits and anything is possible.

If Jack did sleep with Sheila, that would certainly be a blow to Li. That means Jack has been lying to her for over three decades. However, we have a feeling that there is more to this story than a shocking affair being exposed.

The Bold and the Beautiful spoilers suggest that Jack and Li’s adoption might actually be illegal. If Sheila knows this, she could use it to her advantage. Throughout all of Brown’s interviews, she has said one thing over and over. That Sheila is forever connected to the Forrester family and there’s nothing they can do about it. While it was assumed she was talking about being Finn’s biological mother, perhaps she was referencing Li not being Finn’s legal mother.

The Bold And The Beautiful Spoilers: Bombshell Complicates Situation

Will Jack and Li’s adoption being illegal affect the situation despite Finn being a grown man now? How will that affect Carter Walton (Lawrence Saint-Victor) getting a restraining order? Some states have what is called “grandparents rights,” and that could be the angle that this story is going. Sheila is so manipulative that she probably could convince a judge that she’s served her time and just wants to get to know her grandson.

We know that Jack will make a proposal on how to get rid of Sheila which horrifies Finn. We have to wonder if Jack considers killing the woman. Death might be the only way to protect Steffy and baby Hayes. We will have to keep watching the CBS soap to find out what happens with this storyline.

DOOL Spoilers: Tripp Makes A Declaration Of Love To Allie