B&B Spoilers: Sheila Carter Is Back And Better Than Ever 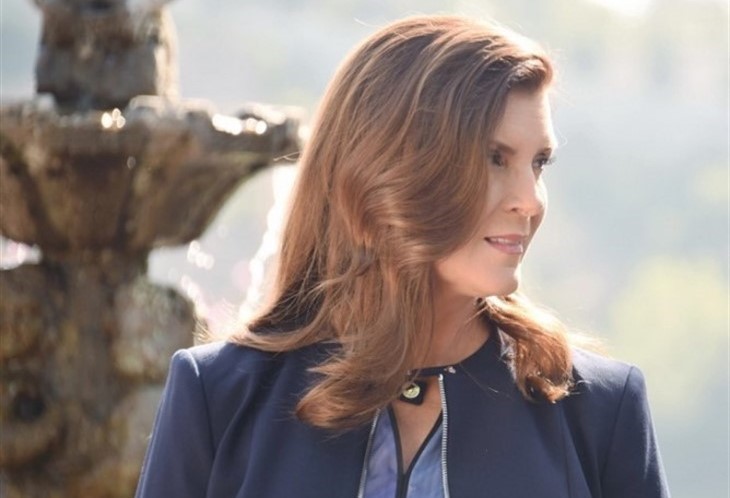 The Bold and the Beautiful (B&B) spoilers tease that Kimberlin Brown is back on the CBS sudser as Sheila Carter, the character fans loves to hate. Sheila has been a very naughty girl over the years, taking advantage of people, dishing out revenge and taking people hostage. Yet she always lands on her feet, and now she is back to claim her son and grandson. Has Sheila finally changed? Has the sly vixen morphed into a good girl?

She is back in town on the occasion of her biological son John Finn (Tanner Novlan) marrying into the Forrester family, and she is also eager to meet her new grandson.

Let’s find out what Brown has to say about her alter ego. She recently talked to Soap Opera Digest’s podcast, Dishing With Digest, and we have all her best quotes about Sheila right here. Keep reading to find out what you can expect from a more mature Sheila Carter.

The Bold and the Beautiful spoilers: Sheila Carter is Back in LA

“When I found out that Finn was Sheila’s son, I was excited,” previews the beautiful and talented actress. “Think about this, Sheila finally has a connection to the Forrester’s—through Steffy whether she likes it or not.” Chances are very good that Steffy Forrester (Jacqueline MacInnes Wood) will detest being Sheila’s daughter in law.

In a scary good Friday Cliffhanger, Sheila introduces herself to an utterly stunned Finn. He knows he was adopted, but when Sheila walks out of the shadows and tells him she’s his mother, he doesn’t know what to think.

From there, “He insists on taking her into the Forrester home for introductions,” says Brown. “It’s really quite a nice moment.” But as fans would expect, it goes downhill from there!

The Bold and the Beautiful spoilers: What Happens Next on the CBS Sudser?

The Forrester’s are shocked to see Sheila, but it seems as if Finn’s dad Jack Finn (Ted King) knew this major secret all along.

Has Sheila really changed this time around? According to Brown, “I really thought she had changed he last time she was there.” She was careful not to give too many of Sheila’s secrets away, and we have a feeling that August Sweeps is going to be jam packed with suspense and thrills as Sheila ingratiates herself once again.

DOOL Spoilers: Where We Left Off Before The Olympics