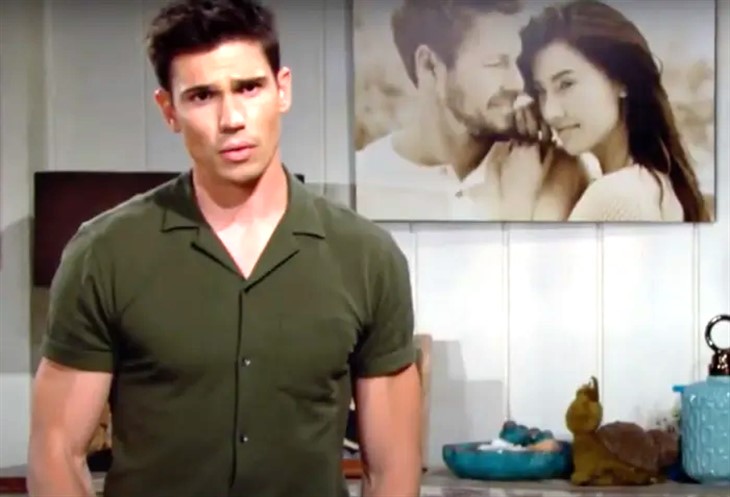 The Bold and the Beautiful (B&B) spoilers for the next 2 weeks reveal that Sheila Carter’s (Kimberlin Brown) latest return will take center stage as the schemer causes trouble and angst among the CBS sudser’s regulars. Look for chaos to ensue in Eric Forrester’s (John McCook) house.

It doesn’t matter that she is beloved John “Finn” Finnegan’s (Tanner Novlan) biological mother. No one can forget the awful things she has done in the past and his wife Steffy Forrester (Jacqueline MacInnes Wood) especially will have issues with letting her into their lives.

The Bold And The Beautiful Spoilers: -Sheila Carter Is Back

Expect Finn to get the back story from Sheila about his life. She will tell him she wants a mother-son bond especially after learning she has a grandson. Sheila wants to turn over a new leaf for her grandson Hayes Forrester Finnegan but Steffy is not impressed even if Finn is. Is there trouble in paradise for the newlyweds already?

Last week on The Bold and the Beautiful we saw the feisty lady reveal herself to Finn and he wanted her to meet everyone at the wedding.

Sheila protested knowing they would turn on her. Finn got his way however and it was like WWIII erupted when the families got a load of Sheila.

B&B spoilers – Steffy Forrester Is Not Impressed With Sheila Carter

Steffy will go ballistic on The Bold and the Beautiful upon seeing Sheila. As a result, Finn doesn’t know what to think and his marriage is already off to a rough start.

When Steffy delivers an ultimatum, who does Finn choose? Meanwhile look for protective papa Ridge Forrester (Thorsten Kaye) to make his own demand of Sheila.

The Bold And The Beautiful Spoilers – What Is Sheila Up To This Time Around?

B&B spoilers reveal Quinn and Carter Walton (Lawrence Saint-Victor) keep their love fest going and Eric stuns Quinn with surprising news. Is he having second thoughts about their marriage?

Later, Finn will do something sneaky that Steffy won’t like. Is Sheila about to break up his happy home and send

Steffy back sniffing around Liam Forrester (Scott Clifton)? We hope that ship has sailed but as TPTB have shown, these two have an irresistible magnetism.