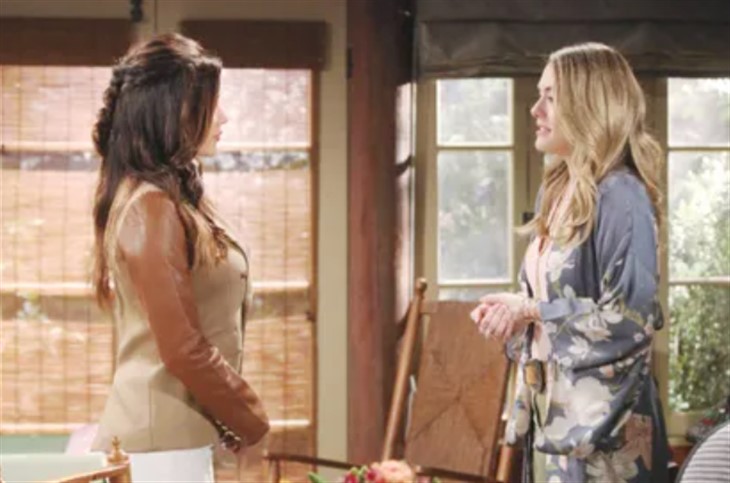 Viewers of The Bold and The Beautiful will not be surprised that the announcement of the results of Steffy’s paternity test have resulted in anything but peace! Hope cried her eyes out, Liam was set straight with a ton of new boundaries by Dr. John “Finn” Finnegan (Tanner Novlan) and Hope doesn’t know who she can trust anymore!

B&B recaps show Steffy and Hope had become allies and at least friendly up until Steffy had to reveal her one night stand with Liam when she found herself pregnant and didn’t know which man’s the baby was. Finn and Steffy struggled but agreed they loved each other, Finn is disappointed but knew it could happen.

According to Bold and Beautiful spoilers, Liam wanted much more access to Steffy and the new baby through the pregnancy and Finn denied it to him, and Hope feels betrayed by both Liam and Steffy. Liam was sorry but acted more like he was sorry he got caught than that he was sorry that it happened at times, and Steffy knows she owes Hope an apology.

Steffy and Hope work in the same building and Steffy is actually Hope’s boss, so they have to be at peace or their work might be affected. Steffy reaches out to Hope and tells her they need to talk. Hope is somewhat upset, but agrees to meet. As the two women rather uncomfortably sit down together, Steffy tries to keep things, including herself, as calm as possible. Steffy tells Hope the discussion is not about work, even though the meeting may be there. She wanted the meeting in a place that would be neutral as far as personal issues were concerned.

B&B spoilers reveal Steffy tells Hope they are equals and explains she thought work would be more of a neutral place than one of their homes or the Forrester house. Steffy is sincere as she tells Hope that she knows she needs to apologize to her for not sending Liam on his way instead of coddling his insecurities that night and not being a stronger person herself.

The Bold And The Beautiful (B&B) Spoilers: Is Liam The Father Or Did He Pay Someone To Fake Resultshttps://t.co/rJ4kngsLSB

She knows that having gotten drunk was no excuse for what happened, and she hopes that Hope can forgive her for her part in her and Liam’s indiscretion in time. After so many years of romantic rivalry between the two of them, Hope is a bit taken aback at Steffy’s humility and honesty, although she is beginning to see, as Steffy already has, Liam is the most at fault. Steffy assures Hope she loves Finn and Finn loves her, and tells her about the boundaries that Finn and she discussed to put up protections against Liam’s waffling. Hope agrees that it will take time for her to forgive Steffy as well as Liam, but of the two, it will probably be easier to forgive Steffy!

90 Day Fiance Spoilers: What Do Stephanie & Paris Hilton Have In Common