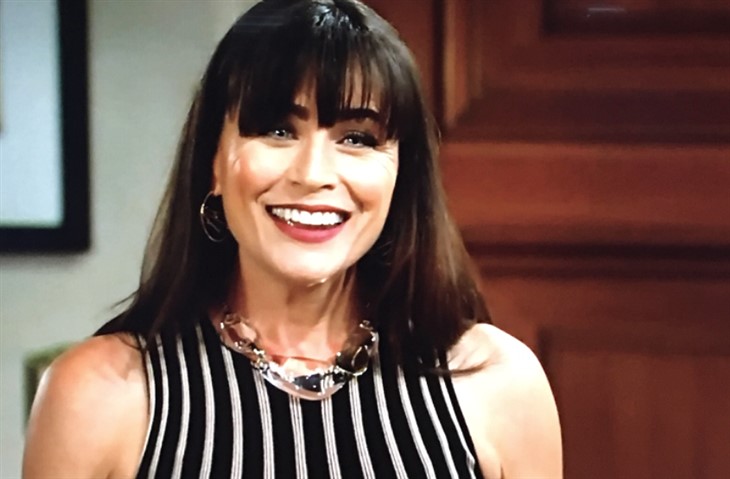 The Bold and the Beautiful spoilers document that Quinn Fuller Forrester (Rena Sofer) shared sensitive information with Shauna Fulton (Denise Richards). Eric Forrester (John McCook) listened from a concealed location in the Forrester mansion in the voluminous foyer as that dialogue was spoken, with a surprising result.

Eric did not get upset when he walked into view. His self-reveal was followed by heartfelt exchanges with both ladies.

Yes, Queric is back. Whether it can endure is one question. Whether Eric will want it to is another.

Carter Walton (Lawrence Saint-Victor) was tasked with expediting the divorce proceedings. Then, Eric decided that he did not want to live without Quinn.

So, the end of Queric was halted, much to Bridge’s chagrin. This couple, which has been married, divorced, and remarried on multiple occasions, offered a snap judgment. Quinn must have tricked Eric into reconciling, but that was not true.

Quinn’s response to Eric’s tell about the physical problem he has developed has proved Bridge wrong. But a caveat must be added based on Quinn’s backstory. She has proven Brooke and Ridge wrong so far.

Quinn is projecting genuineness in stating that she will make whatever sacrifices are necessary, for however long, to be with Eric. Sofer’s alter ego feels a mix of deep sympathy and guilt.

Eric has natural doubts about whether he can ever be the man he was. But he is also overjoyed to be back with Quinn again.

As summer yawns in Los Angeles, California, Quinn is committed to being Eric’s wife. Eric wants their marriage to endure but also harbors uncertainty. He is not sure if Queric can work as it did before.

The Bold And The Beautiful Spoilers – Unspoken Factors Make An Impact

Eric does not know that Quinn and Carter keep Quarter going after he assumed that pairing ended. A reveal of that type could instantly break Eric’s trust.

Quinn’s feelings for Eric remain intact. But she now loves two men. Shauna’s insightful discussion with her longtime friend implies that further conflict is ahead. So, warm feelings could turn cold as the fall winds arrive on B&B.