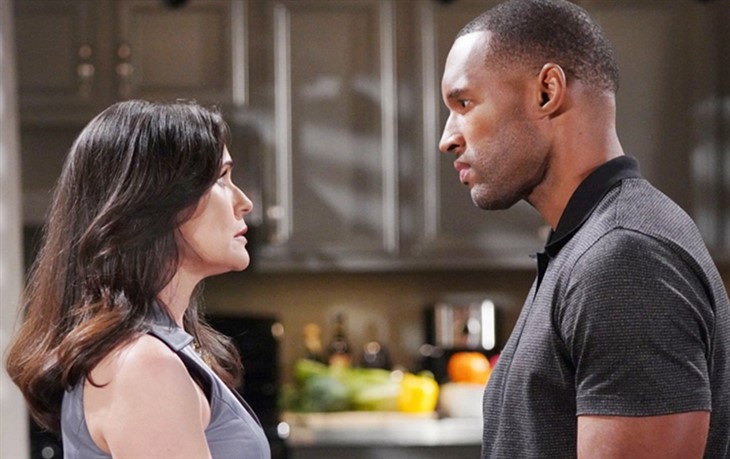 The Bold and the Beautiful (B&B) spoilers for Thursday, September 9, 2021, reveal in Los Angeles Carter and Quinn in yet another compromising moment.

The Bold and the Beautiful Spoilers: What Will Eric Forrester Do?

We all know that ever since they discovered how much they really, really like one another, Quinn (Rena Sofer) and Carter (Lawrence Saint-Victor) just can’t resist any moments alone. Their feelings are there and have become too hard to hide at all times. On Thursday, they are alone again and share a very intimate conversation that Eric (John McCook) happens to overhear.

Will what they say to one another change his feelings about his marriage to Quinn? He never realized they actually have feelings for each other but it looks like he’s about to find out this affair was more than just sex. It may have started that way but it’s not what evolved to. What will Eric ultimately decide to do about his problem and will he start feeling it’s become Quinn’s problem too? Does he love her enough to let her go or will he have another idea? Rumor has it what happens with these three goes in a very surprising way…

Somehow Sheila Carter (Kimberlin Brown) managed to keep her eyes shut and not move an inch as Steffy Forrester (Jacqueline MacInnes Wood) went off on her. She listened to everything and you could see the wheels turning in her crazy little head. You could also hear the voices in her head, as voices have been swirling in Sheila’s head for decades. She spent the entire lecture plotting what she will do next and she’s now more determined than ever to break up Steffy and Finn.

She doesn’t even think it will be very hard. Steffy doesn’t want her anywhere near Finn (Tanner Novlan) and Sheila is well aware that she has the not-so-bright doctor falling for her every little word. The man is wrapped around her finger already and she is determined that he not be wrapped around Steffy’s fingers at all. Sheila will do just about anything to make that happen, so Steffy better watch her back. Stay tuned to The Bold and the Beautiful weekdays to see how these stories play out.