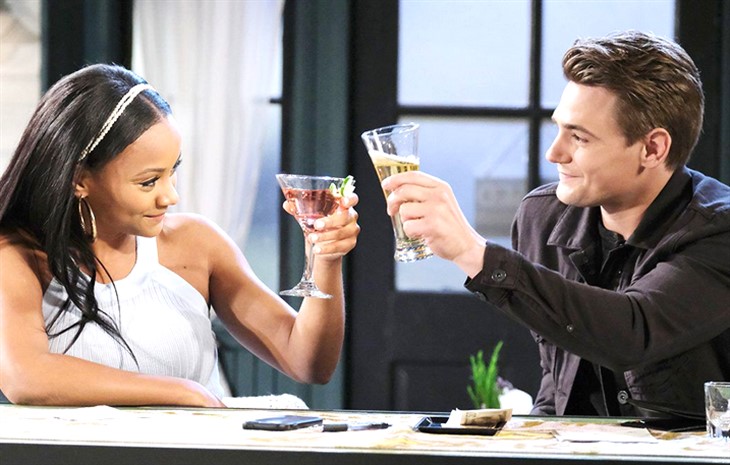 Days of Our Lives spoilers reveal that the devil is coming back to Salem. Nearly 30 years after Marlena Evans (Deidre Hall) was possessed by the devil, he’s coming back to finish what he started. This time, it begins with Johnny DiMera (Carson Boatman). Lindsay Arnold, who plays Allie Horton, talks about Johnny taunting the devil after a family secret is uncovered.

DOOL spoilers reveal that the story of Marlena’s possession starts off with Will Horton (Chandler Massey). It was written in detail in Will’s script, “The Sami Brady Story.” When Johnny reads it, he’s excited about the discovery. He wasn’t told anything about his grandmother being possessed by the devil, or John Black (Drake Hogestyn) having to save her.

Johnny immediately tells his twin sister, Allie. Even though Allie believes in hell, she isn’t sure if the possession story is legitimate. Arnold explains to Soap Opera Digest how Allie feels about the discovery.

“This is next-level crazy, even for their family, where crazy things happen all the time. They’ve never gone into another dimension or brought in the afterlife, so this is the first time that Allie is like, ‘Okay, usually, it’s just humans being crazy and now we have the devil involved?’”

Days of Our Lives spoilers reveal that Allie isn’t sure if Marlena being possessed by the devil is actually true. So, she decides to ask John Black (Drake Hogestyn) to get the facts. That is when John actually confirms the story and tells Allie about that piece of shocking family history.

She is shocked and knows Johnny will do what he wants. At the same time, Allie feels that the possession is her grandparent’s story, not Sami’s and not Johnny’s. She feels that if John doesn’t want the story publicized, then Johnny should respect that. Of course, Johnny views it completely differently.

The actress teases that Johnny starts messing with the possession story, which is a bit like taunting the devil.

“Allie definitely believes in the devil and hell and all of those things so I think for her, she’s a little nervous to get involved with that kind of energy and to even talk about it or taunt it, in a way.”

As fans have already heard, the devil answers and Marlena ends up possessed once again. How will Johnny feel when he discovers that he is the person that triggered this new hell for “Jarlena?” We will have to keep watching to find out what happens next with this developing storyline.