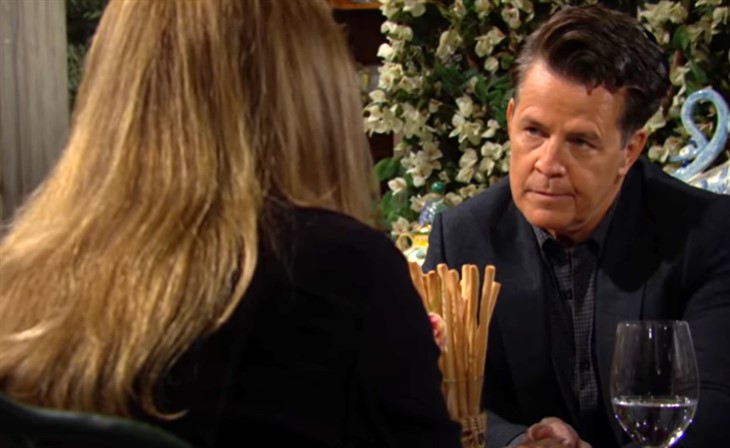 The Bold and the Beautiful spoilers for Wednesday, November 17, 2021, reveal Jack finally coming clean with his wife about who their son’s father really is.

The Bold And The Beautiful Spoilers – Will John Finn Finnegan Also Learn The Truth?

It looks like Sheila Carter (Kimberlin Brown) really got to Jack Finnegan (Ted King) when she threatened to tell the truth about their affair and how Finn (Tanner Novlan) is the result of that affair. After all, Finn has been asking who his real father is and Jack wouldn’t want that answer coming from her, right?

Jack feels it’s the right time for Finn to know, but he also has to save his marriage first — or at least try — by telling his wife that the baby they adopted was really his biological child because he cheated on her.

So, poor Li (Naomi Matsuda) gets the shock of her life as Jack tells all. He had an affair with a crazy woman named Sheila Carter and that produced a baby boy he convinced her to give up and give to him. That baby is Finn and the child they raised all these years. Will Li be able to forgive her husband and will Jack now finally have the guts to confess this all to Finn, as well?

No, Quinn Fuller (Rena Sofer) doesn’t have another man wanting her, but she does have Zende (Delon De Metz) wanting to pick her brain so he can choose the perfect gift for Paris Buckingham (Diamond White). Little does Zende know that Quinn is the one who made Paris’s stomach do all those somersaults on their first date. We will assume he wants something from her famous jewelry collection.

Zende is planning quite the romantic night for Paris, but things might not go as planned when Thomas Forrester (Matthew Atkinson) gets wind of what’s going on and his jealousy kicks in. He has it bad for Paris and even Douglas (Henry Joseph Samiri) likes her, so how much more perfect can she get? But what will do about the Zende problem? Should Zende be watching out for his cousin? Stay tuned to The Bold and the Beautiful weekdays to see how this story plays out.