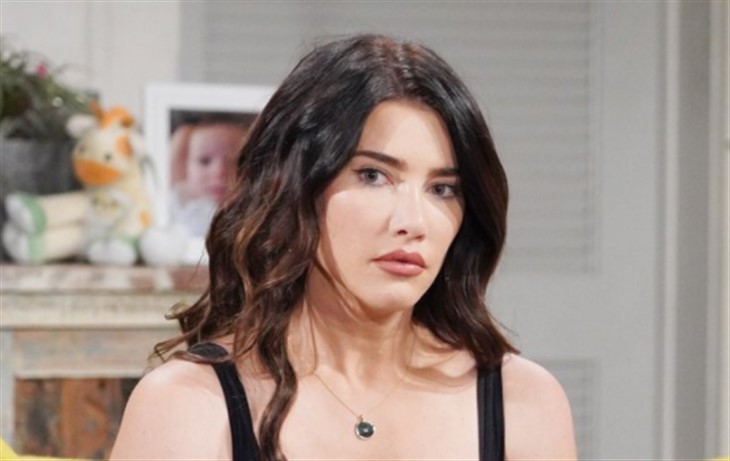 The Bold and the Beautiful (B&B) spoilers for the week of September 13-17 reveal that a whole lot of shaking, breaking and quaking is going on in LA. For starters Paris Buckingham (Diamond White) can’t get hunky John “Finn” Finnegan (Tanner Novlan) out of her mind, Quarter aka Quinn Forrester (Rena Sofer) and Carter Walton (Lawrence Saint-Victor)—are up to their old tricks, and Steffy Forrester (Jacqueline MacInnes Wood) plans a mother of a comedown for Sheila Carter (Kimberlin Brown).

Eric Forrester (John McCook) has a kooky plan to make Quinn happy—hook her back up with fling Carter. Does he have dementia AND erectile dysfunction?

Yikes, Eric, what are you thinking? Carter is your lawyer and CEO, not a stud for hire. Quarter poo-poo the idea but it won’t be long before they realize Eric is on to something. But is he just testing them big time or is he genuine?

Meanwhile Paris accidentally sees Steffy and Finn getting it on and instead of realizing he is a taken man, she starts fantasizing about him herself!

She has her own flavor of the month, Zende Forrester Dominguez (Delon de Metz), but there’s just something about Finn that she can’t quit.

Expect some red hot fantasies to come to the surface, so get a tissue to wipe off the screen B&B fans, we are talking 100 degree heat wave here.

Meanwhile Steffy plots to take care of her monster-in-law Sheila for good. Look for her to not back down one inch over Sheila having no part of Finn nor Hayes Forrester Finnegan’s life. This allows Paris to play good cop to Steffy’s bad cop!

Elsewhere that loveable blonde Donna Logan (Jennifer Gareis) tells her sisters Katie Logan (Heather Tom) and Brooke Forrester (Katherine Kelly Lang) that she hearts Eric. At the same time the ladies want to know all about the state of Katie’s relationship with Bill Spencer (Don Diamont).

Speaking of Eric, Brooke and Ridge Forrester (Thorsten Kaye) know he isn’t quite right (huge understatement) and spend their time trying to wheedle it out of him. Does Ridge ever go to work?