B&B Spoilers: Finn and Hope Have Chemistry – Sheila and Deacon Light The Spark 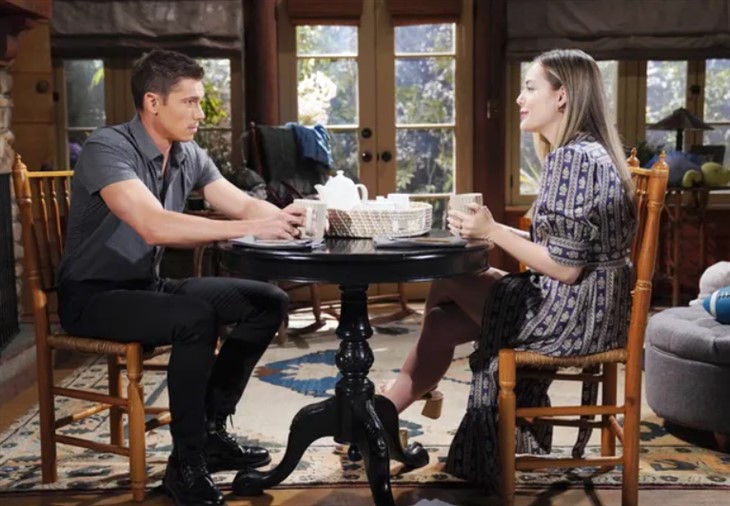 The Bold and the Beautiful (B&B) spoilers document that in Los Angeles Hope Spencer (Annika Noelle) and John Finn Finnegan (Tanner Novlan) have a family bond. Viewers have insight into why Hope and Finn were bonding at the cabin now that Sean Kanan’s (Deacon Sharpe) return has been confirmed by Soap Opera Digest.

Devoted B&B fans know that Deacon was last seen in 2017. He was revealed as the person who fired shots at Quinn Fuller (Rena Sofer). Sheila was in town at the time as well. She was initially accused of being the shooter and was arrested.

Yes, Hope’s father and Finn’s birth mother are roaming free in Los Angeles, California, as of this month.

Sheila was not making progress in her attempts to forge a connection with Finn and his son, who is her grandson, Hayes Forrester Finnegan (Samantha Worden and Piper Harriet). She has been trying to develop a plan that neutralizes Steffy Forrester Finnegan’s (Jacqueline MacInnes Wood) influence over him.

Deacon was last seen being dragged out of the Forrester mansion. He admitted to Quinn, who is one of his ex-wives, that he tried to shoot her. Deacon was arrested and imprisoned.

Kanan’s ever-entertaining character is likely being set up as Sheila’s useful accomplice. They both will want to bond with their children and, as fans saw, Hope told Finn that she understands the binding ties of family.

Impressively, Kanan won a 2021 Daytime Emmy Award in the Outstanding Limited Drama Series category for Studio City. He is the creator of the online show, its lead actor, portraying Dr. Pierce Hartley, and one of its writers. The cast of Studio City, which is described as “A love letter to the soaps!”, includes several other notable broadcast daytime drama veterans.

Hope will reveal that she has been receiving letters from her father while he was in jail these past years. The impact of Deacon’s words and his desire to reconnect indicates a coming conflict.

So, Steffy is adamantly opposed to her spouse having contact with his birth mother due to her criminal history. Deacon has a criminal history as well, which implies that Liam Spencer (Scott Clifton) will not be supportive of Hope’s openness to her father.

Brooke Logan Forrester (Katherine Kelly Lang), who has strong opinions about all things family, does not want Sheila around. She feels the same about her daughter Hope’s father, Deacon. That will make Brooke Deacon and Sheila’s mutual enemy.

Many characters have crossed over and back between B&B and its sister show, The Young and the Restless, through the years. Sheila’s infamous run began on Y&R in 1990. She and was last seen in 2007. Sheila first crossed over to B&B in 1992.

Michelle Stafford (Phyllis Summers on Y&R) played an apparent version of Sheila on Y&R in 2007, though that was disputed by Sheila when B&B’s characters questioned news of her apparent demise. That happened ten years later in 2017.

Sheila and Deacon defy boundaries when attempting to reach their offbeat goals. Sheila will be the brains, with Deacon probably being used by her as the risk-taker in this projected, combined storyline.