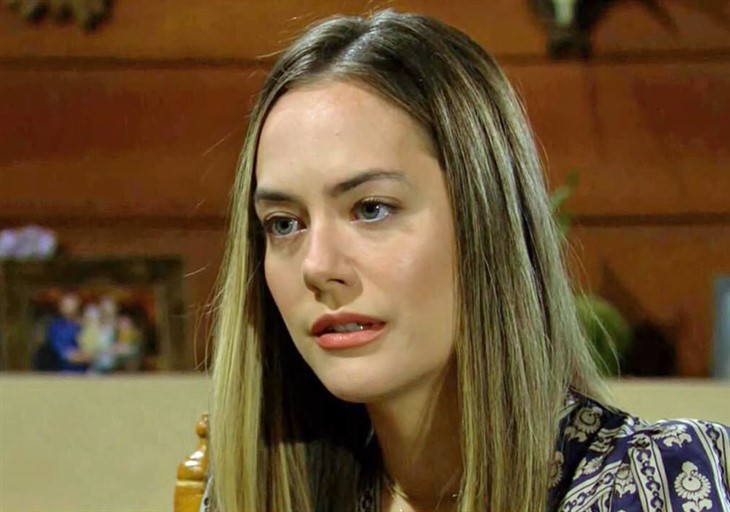 The Bold and the Beautiful spoilers reveal that Hope Logan Spencer (Annika Noelle) wants to reconnect with her father. However, her family is against it and will take drastic action to protect Hope. Resentful of her family’s overbearing and controlling nature, Hope could keep more secrets and bond with Deacon Sharpe (Sean Kanan) anyway.

The Bold And The Beautiful Spoilers – Hope Logan Spencer’s Yearning

B&B spoilers reveal that when Deacon was still in prison, Hope began sending him letters. Under normal circumstances, Hope doesn’t like secrets. In fact, keeping information from Hope is what led to Liam Spencer (Scott Clifton) nearly losing his family. Now he is finding out that Hope has been keeping a secret all of this time.

Hope didn’t tell anyone about communicating with Deacon because she knew how they would react. As for why Hope reached out to Deacon, Noelle explained to Soap Opera Digest,

“A part of her was always craving that kind of relationship with her father, and she felt bad about the circumstances… it was just a daughter craving the love and affection from a father, regardless of the bad things he has done in the past… she was very protective of this rekindled communication.”

Hope is excited that she has another chance to know her father but she knew it would be a hard sell to her family. Hope was hoping she could prepare them but there wasn’t enough time. When Deacon voluntarily left the tense situation, Hope blamed her family. In Hope’s mind, she wants a relationship with Deacon but her family is driving him away. So, Hope mgiht feel that she’s losing her father all over again.

The Bold And The Beautiful Spoilers – Resentful Of Controlling Family

The Bold and the Beautiful spoilers reveal that Hope was insulted by how Brooke Logan Forrester (Katherine Kelly Lang) was treating her like a child. Hope also resented Liam insinuating that she was being reckless by reaching out to her father.

In the weekly preview, Deacon and Hope see each other again at Forrester Creations. This must be when Deacon puts on a disguise and sneaks into the building to surprise his daughter. In one scene, Liam is screaming at the top of his lungs, presumably at Deacon. Liam demands that he get out immediately. Hope won’t take kindly to this, especially when she admitted how important it was for her to have a relationship with her father.

Wanting to avoid further judgment and drama, Hope will want to bond with her father without anyone interfering. This could lead to Hope to begin to sneak around, keep secrets and even lie to Liam and Brooke.

If they find out that Hope has been secretly meeting with Deacon, Brooke and Liam could take extreme measures to end it. However, they could push Hope away by doing that and she will go straight to Deacon. If that happens, Hope could feel forced to pick a side. Keep watching the CBS soap to find out how this story develops.