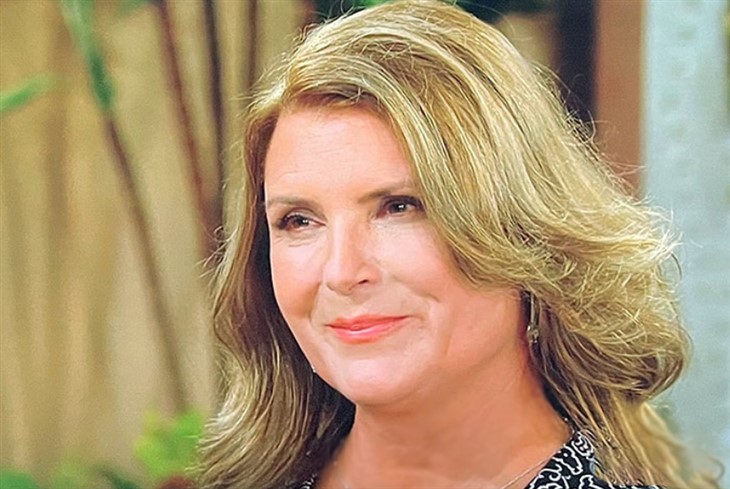 The Bold and the Beautiful (B&B) spoilers tease that Kimberlin Brown has brought fans tons of joy with her reemergence as the character they love to hate, Sheila Carter. Is there a more villainous vixen in all of soapdom? That is very debatable as evil Sheila has scraped the bottom of the devil barrel and lived to tell the tale, coming back better and stronger each and every time.

Brown dished to Soap Opera Digest about her character and how she might be the only one to think that Sheila has a warm heart beating in her cold, cold body.

Brown has portrayed Sheila for years and years, so perhaps she has a better insight into the cruel lady than others who are not as close to the character? According to Brown, “Quite honestly I’ve always said this poor girl has been misunderstood her whole life and she just wants to be loved and now fans are seeing that, too.”

Sheila came back to LA to meet the son she gave up for adoption and meet her grandson. So yes, fans are seeing a different side to Sheila, but has she really changed? Not one bit, and fans would not have it any other way!

Sheila is conning her son, John “Finn” Finnegan (Tanner Novlan) and he has no idea about how lowdown she will go to be in his life. His SO Steffy Forrester (Jacqueline MacInnes Wood) has tried to tell him but so far he has been deaf and blind to her pleas. Will Sinn meet the end of the road so soon after their marriage?

The Bold And The Beautiful Spoilers – What Happens Next On The LA Based Show?

By the way, Steffy has yet to file the marriage documents! She was so miffed that Finn allowed Sheila to hold their son that she kicked him out to the doghouse, erm, guesthouse. Brown may be on to something when she says, “Sheila finally feels as though she has the upper hand.”

Sheila now has Finn believing she is in the middle of a medical emergency and to show how stupid he is being about her machinations, he is an actual doctor. Sheila indeed appears to be in charge once again!