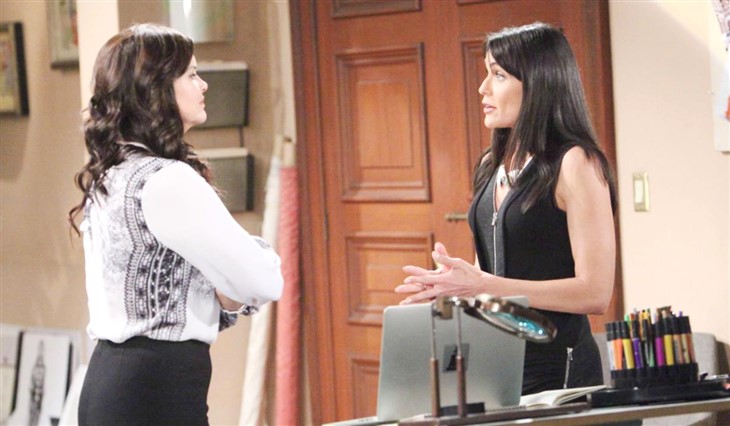 The Bold and the Beautiful spoilers document that Katie Logan (Heather Tom) reveled in the two-level conversation she had with Quinn Fuller (Rena Sofer) and Carter Walton (Lawrence Saint-Victor). The talk was intended to bait Quinn into shooting her mouth off, and she did.

The attempt was part of Katie’s push to make Carter realize that Quinn is not the right woman for him. Katie hit an easy target by provoking a series of responses from Quinn.

The collective belief, among those who know her, is that Quinn will inevitably betray Eric Forrester (John McCook). The hope is that Carter realizes Quarter was a mistake and that he was used.

Quinn has good reason to think she is God’s gift to mankind. She loves herself. She believes all men should love her.

In terms of Eric, it is no wonder that Quinn commits outrageous, amoral acts. What lasting consequence has she faced as a result? Yes, Eric is her enabler.

Queric still exists. Now, in a twisted decision, Eric agreed to cut himself off from the sweet soul of Donna Logan (Jennifer Gareis). Quinn got what she demanded when Eric fired Donna and cut personal ties with her.

Viewers saw in previous scenes at Carter’s apartment that there was potential between him and Katie. That is why the recent lunch at Il Giordino was confirming.

Katie stood aside from Carter as Quinn spewed snarky words. But the instigator of Quarter was unaware that Carter began shifting his feelings to Katie in recent weeks.

Tom’s character did a good job hiding her knowledge of a looming Karter pairing that is bound to drive Quinn bonkers.

The Bold And The Beautiful Spoilers – Carter Walton Is Not Played

Katie is not pretending to be interested in Carter. She is not sending signals that a relationship could begin to provoke Quinn.

Sure, Katie knows that a Karter connection will evoke a response from Quinn and that Eric will likely become aware of that outcome. But Katie is not Quinn. So, Carter is not being used.

This situation must be handled with care so that Carter’s trust in Katie is not threatened and Eric again sees who Quinn is. His wife has caused him great pain to date. Katie and Carter do not want to intentionally further that misery.