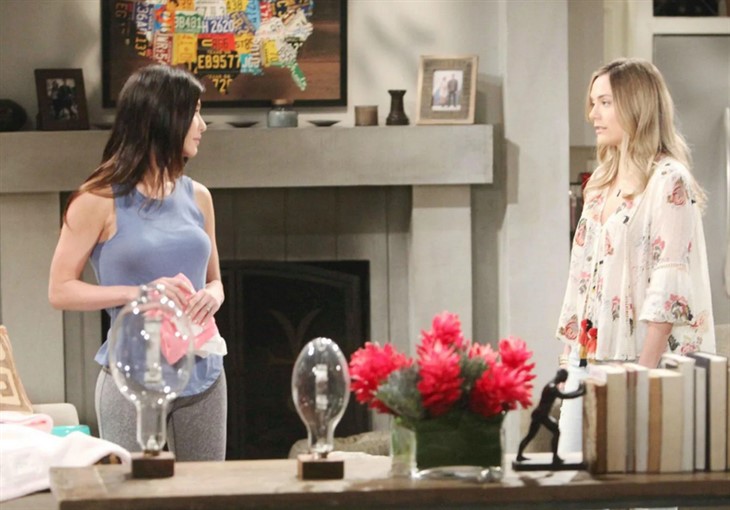 The Bold and the Beautiful spoilers for Wednesday, November 3, 2021, reveal a feeling of deja vu as Steffy Forrester and Hope Logan revert to form. How far will these two go as they review their rivalry?

Every time it looks like Hope (Annika Noelle) and Steffy (Jacqueline MacInnes Wood) might actually get along for an extended period of time as two stepsisters should do, something happens to blow that all up. Usually, that something was always Liam (Scott Clifton) but Steffy really and truly does seem over Liam. She just wants to keep her new husband in check and away from Hope.

Well, easier said than done, Steffy. Your new husband likes to have female friends to confide in so now that Paris Buckingham has moved out, Hope has figuratively moved right in giving Finn (Tanner Novlan) the same advice he was getting from Paris — which is everything he wants to hear.

Steffy doesn’t like this at all and lays into Hope for interfering in her marriage. When Finn and Liam decide to step in, whose side will each man take? Will Liam end up on Steffy’s side and will Finn support Hope? Uh-oh…

Donna (Annika Noelle) really, really wants Eric Forrester (John McCook) back in her life, although she now realizes his wife is more than a little bit nuts and can hurt her if she wants to. When Eric wants to talk to her, Donna prays that means he is ready for them to reunite and he’ll make sure she stays safe and Quinn won’t get to her.

But did Quinn (Rena Sofer) get to Eric? She made some pretty big demands and Eric might decide to listen to her. After all, he wanted a commitment and promises from her and she came through.

But there have to be some underlying problems there if Eric has no erectile problems with Donna but can’t seem to perform with his wife. If sex isn’t everything in a marriage, who will Eric ultimately choose, and will anyone be in danger after he makes his decision? Stay tuned to The Bold and the Beautiful weekdays to see how these stories play out.