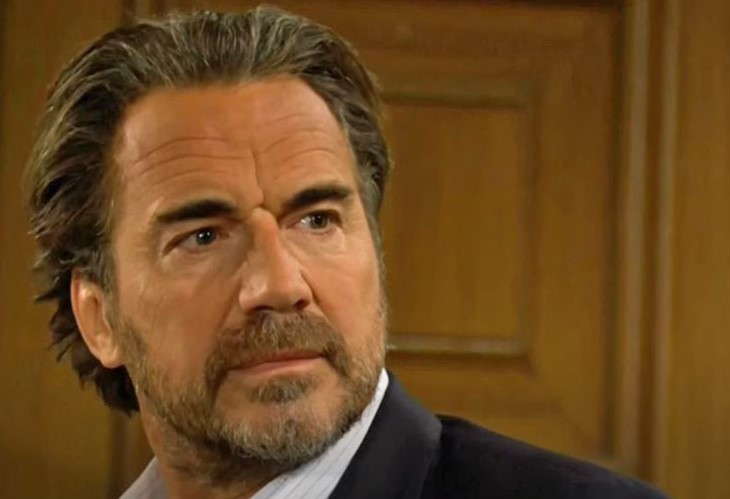 Viewers of The Bold and The Beautiful will recall that Deacon started out settling for Chinese takeout with Sheila Carter (Kimberlin Brown) for his Thanksgiving meal! Viewers of The Bold and The Beautiful will recall that spending the holiday with Sheila was giving him some serious indigestion, and he told her he was going to try crashing the feast because he knew his daughter Hope Spencer (Annika Noelle) would be there. Sheila didn’t think that would fly, and she was very skeptical about it. But Deacon was not going to be dissuaded from his plan, and if it was going to fail, he was determined that it would not be because he didn’t at least try. He finishes up his takeout and heads out the door, headed to the Forrester mansion. He is sure that Hope and possibly even Brooke Forrester (Katherine Kelly Lang) will plead his case to Ridge and Liam Spencer (Scott Clifton). After all, Hope took up his case before about her rights to have her birth father in her life!

Viewers of The Bold and The Beautiful will see Deacon cheerfully knock on the Forrester’s door and say “gobble gobble” as Brooke looks confused and Ridge looks angry! It doesn’t look like Brooke is going to act like she did before, and plead his case to Ridge – perhaps it’s been causing problems between the two, thinks Deacon to himself. The house is full of Forresters and friends, and even Forrester employees who aren’t related – Deacon’s thinking he doesn’t know what the big deal is. It doesn’t look like a party that would have been by invitation only, considering all the people who are there! He reads the room, and other than Ridge’s scowl and Brooke’s confusion everyone else seems to be mingling and happy. Hope spots him and looks pleasantly surprised although Liam looks like he wants to use Deacon for a dart board – but that’s to be expected! Carter Walton (Lawrence Saint-Victor) looks like he’s been crowned king of the turkeys with a crown that looks like a turkey, which gives Deacon a chuckle. But Ridge’s scowl deepens and keeps looking more and more threatening, and he looks like a bomb is ready to explode! Soon he rises and comes towards Deacon!

The Bold And The Beautiful Spoilers – An Explosive Confrontation Ensues

Viewers of The Bold and The Beautiful will see an explosive confrontation ensue as Ridge delivers a warning to Deacon! Deacon can see that Hope wants to intervene, but Liam is holding her back from even approaching him! Brooke isn’t doing a lot to stop Ridge either, but she does look concerned. Deacon thinks to himself maybe Sheila is right – she keeps telling him Forresters don’t believe in second chances and that people can ever change. Viewers of The Bold and The Beautiful know that definitely applies to Ridge! Ridge is furious – how dare this criminal darken his door? Brooke and Hope both try to interrupt Ridge’s vicious rant, because he is definitely making a huge scene in front of family, friends, and Forrester employees! Deacon decides to just back up and exit gracefully, because the last thing he wants is a fist fight between Hope’s father and her stepfather on Thanksgiving Day, and Ridge looks like that’s his next move!