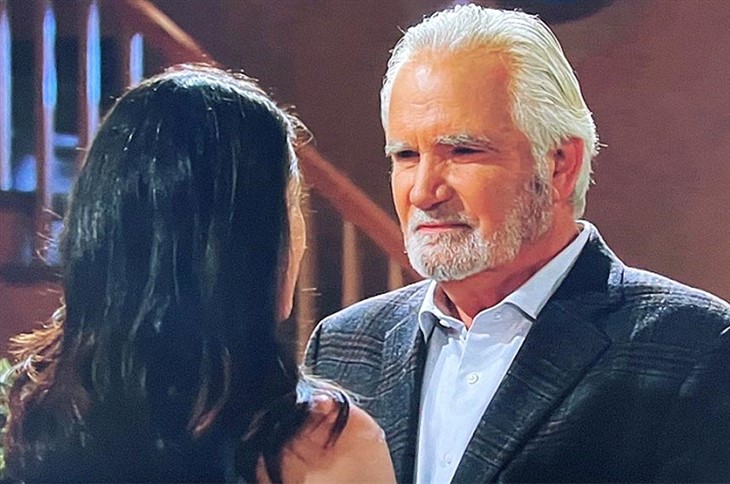 The Bold And The Beautiful Spoilers indicate that Eric Forrester (John McCook) has kicked Donna Logan (Jennifer Gareis) out of Forrester Creations. Eric has also kicked Donna out of his life. Has Eric made a mistake?

The Bold And The Beautiful’s Quinn Forrester (Rena Sofer) was incredibly jealous when she learned that Donna was helping Eric with his ED problems. Donna very innocently hugs Eric causing him to respond to her. Unfortunately, Eric does not respond to his wife sexually at all. Quinn overheard Brooke Forrester (Katherine Kelly Lang) talking to Eric about his reaction to Donna causing her to fly off the handle. Quinn even went to Forrester to confront Donna. Donna tried her best to explain to Quinn that nothing was going on between her and Eric. However, Quinn didn’t believe anything that Donna said and went home to demand Eric get rid of Donna immediately. Unfortunately, Eric complied and fired Donna from Forrester. Can their relationship ever be the same?

The Bold And The Beautiful’s Donna had hoped for a reconciliation with Eric. After all, Eric was acting like he shared Donna’s feelings to a point. Eric also responded to Donna proving that he was sexually attracted to her. Donna was floored when Eric told her about Quinn’s demands but agreed to leave Forrester without a fight. Will Donna move on to another job and try to forget Eric? Could Donna end up leaving town cutting all ties with herself and Eric? Will Donna ever get over Eric callously dismissing her?

The Bold And The Beautiful Spoilers – Donna Logan Offered To Leave

The Bold And The Beautiful’s Donna offered to leave after hearing Eric’s explanation of Quinn’s wishes. Donna knows that Quinn is bullying Eric like she tries to do everyone else. However, Eric refuses to stand up to Quinn. Eric unfairly told Donna how Quinn was reacting because he knew she would step away instead of allowing him to fire her. Eric selfishly gave himself an out by putting the burden on Donna who was only trying to help him. Was Eric wrong to lay this on Donna forcing her to make her own decision? How will Donna’s sisters deal with her leaving Forrester?

Quinn may believe that she had problems with Brooke before. However, now that Donna is gone from Forrester, Quinn will face the wrath of not only Brooke but Katie Logan (Heather Tom) as well. Has Quinn met her match this time? Will Quinn finally leave Eric now that she knows he can’t respond to her? Will Donna ever forgive Eric even though she is in love with him?