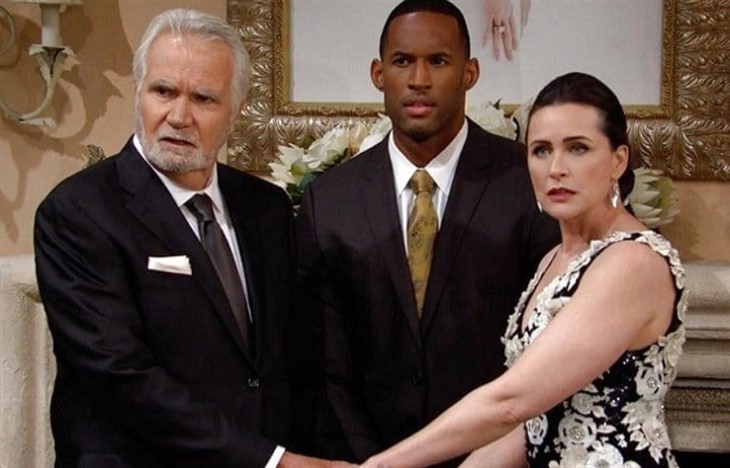 The Bold and the Beautiful spoilers reveal that Eric Forrester (John McCook), Quinn Forrester (Rena Sofer) and Carter Walton (Lawrence Saint-Victor) will start a new chapter. Eric will ask for a reconciliation, but the decision between both men won’t be easy for Quinn. It is possible that there could be an unexpected end to this story.

The Bold And The Beautiful  – Eric Forrester Wants Reconciliation

B&B spoilers reveal that Eric was determined to divorce Quinn until she popped into the office unexpectedly. Quinn called him out for never defending her and forgiving everyone else for cheating but her mistake was unforgivable. Eric winced as Quinn told him about the pain she experienced and then she told him that she wasn’t going to keep apologizing. She was proud of the woman she was becoming and that made Eric look at her in an entirely new way.

During the week of August 16, Eric will tell Quinn that he wants to get back together.

When it comes to Carter, that is a new relationship for Quinn. She can start fresh and not be reminded of all the mistakes she has made over the years. She also doesn’t have to deal with family members that try to interfere. However, Carter has always wanted a family of his own, including children. That is something that Quinn could never give him.

The Bold And The Beautiful  – Quinn Forrester’s Quandary

The Bold and the Beautiful spoilers reveal that if Eric had wanted a reconciliation sooner, Quinn probably would have jumped at the chance. Things are a bit different now because she has developed stronger feelings for Carter. “Quarter” will even utter the words, “I love you” to one another. Quinn will struggle over making the decision as Eric comes with history and a family that hates her. Carter is something new but she can’t give him children of his own.

It is teased that Eric, Quinn and Carter will start a new chapter. That could mean that Eric lets go of the anger he feels towards both Quinn and Carter. However, it could also mean that Quinn makes a decision and she might pick neither man. It might be time for her to strike out on her own and find herself before getting into another relationship.

Fans would like to see Carter with someone closer to his own age — and someone who can give him children. Donna Logan (Jennifer Gariese) keeps bringing up still loving Eric, so it sounds like there will be a reconciliation with them. Where does that leave Quinn? Maybe the soap will bring on someone new in the future. We will just have to wait and see how this story ends.