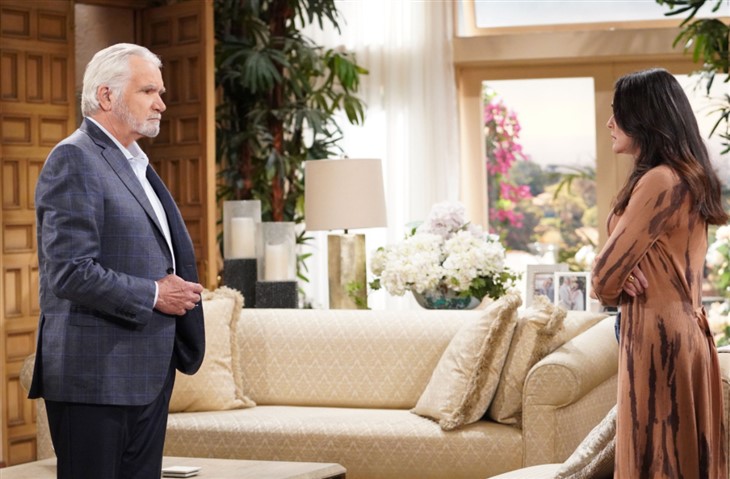 The Bold and the Beautiful spoilers document that Quinn Fuller (Rena Sofer) just entered a period of dormancy. She is not creating mayhem while appearing to be a normal human being, in Eric Forrester’s (John McCook) eyes.

Eric continues to make decisions that are more outlandish than the ones that came before them. Viewers know that he initially accepted Quarter, before endorsing it. Then, he reversed himself to force Quinn to make a choice.
Most recently, Eric concluded that he had to follow Quinn’s demands. So, he fired Donna Logan (Jennifer Gareis) and told her that they could no longer have any personal contact. Those outcomes happened after he found her to be appealing on two different occasions.

The idea that someone like Thomas Forrester (Matthew Atkinson) can not realize a girlfriend, significant other, or wife is absurd. Just as incredibly, Carter Walton (Lawrence Saint-Victor) appears to mirror Thomas’ romantic awkwardness.

Viewers digest this soap, as they know both guys would have zero trouble connecting with women on the other side of the screen. The suspension of disbelief meter is cranked to the highest possible level.

So, Katie Logan’s (Heather Tom) interest begins to normalize Carter’s love life prospects. That will infuriate Quinn, who still has love for him.

Quinn firmly believes that she can kiss Ridge Forrester (Thorsten Kaye) on a beach, fight with Brooke Logan Forrester (Katherine Kelly Lang), position Shauna Fulton (Denise Richards) to falsely marry Kaye’s character in Las Vegas, Nevada, and then act with Carter as she did for a significant period with no true consequences resulting in any regard.

With that type of no-fault marriage, it is no wonder Quinn thinks Eric will serve as her complete, foolish apologist. She behaves as she does because her wealthy husband, who is the patriarch of a storied family, can not put his foot down on anything other than some wimpish notion of forgiveness.

Eric has not forgiven Quinn her transgressions. He has given her license to repeatedly break morality and, at times, the law.

The Bold And The Beautiful Spoilers – Even Eric Forrester Maxes Out

If TPTB intend to keep plots fresh, then Eric must be forced off the path he has traveled for the past five-plus years. Queric has been teetering and logically needs to be crushed of its weight. It is the right course to take.

Eric overanalyzes situations. So, he should realize that treating Donna badly is on him, not Quinn. With that, he will need to make some form of amends.

Deric is the type of feel-good outcome that can renew the fans’ faith in Eric. But he will need to generate strength to pull himself out of Quinn’s powerful clutches.