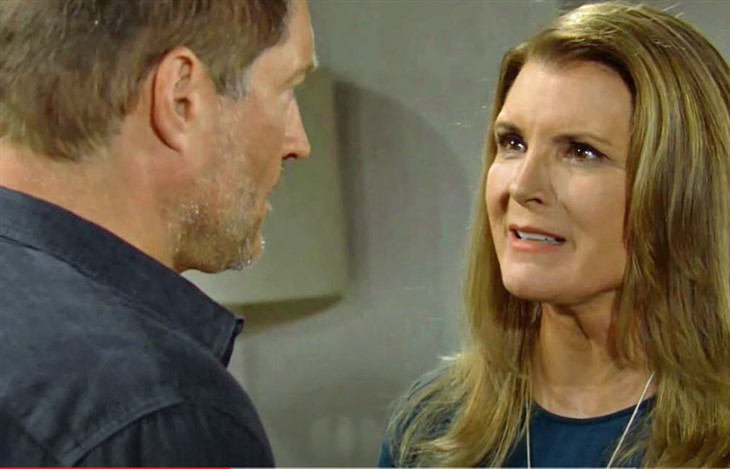 The Bold and the Beautiful spoilers for Monday, November 15, 2021, reveal Sheila Carter having a proposition for Jack Finnegan — or maybe it’s more like an order or a dare.

Sheila (Kimberlin Brown) has pretty much washed her hands of Deacon Sharpe (Sean Kanan). He didn’t turn out to be as useful as she thought he’d be and he branched out on his own in his quest to get to know Hope (Annika Noelle). That means she is on her own again and needs another plan if she wants to be in Finn’s (Tanner Novlan) and Hayes’ lives. When having lunch with Jack (Ted King), she notices how quickly he jumped and hid as soon as Finn showed up and she knows Jack doesn’t want the truth revealed.

Well, Sheila does want the truth revealed and now even Finn wonders who his biological father could be. But neither Finn nor Li know it’s Jack — and Sheila will either tell them herself or she’ll let Jack break the news. Either way, Sheila decides that Finn is going to know the truth sooner rather than later and there’s nothing Jack can do about it.

Brooke Forrester (Katherine Kelly Lang) spends Monday doing what she does best once again — sticking her nose where it doesn’t belong. Now that she decided to relent and allow her adult daughter to see her own father after that little walk down memory lane, she has to once again turn her attention back to Eric Forrester (John McCook) and his problems because she clearly doesn’t have a life of her own.

To that end, Brooke sounds like she’s on instant replay and begs Eric to leave Quinn Fuller (Rena Sofer) and take Donna Logan (Jennifer Gareis) back. After all, Quinn cheated on him and how can this man who cheated numerous times stand cheating?

Considering how many times Brooke has cheated on numerous men, we are not sure where her standing is here, but she at least wants to see Eric and Donna happy and thinks they can be happy together. Stay tuned to The Bold and the Beautiful weekdays to see how this story plays out.