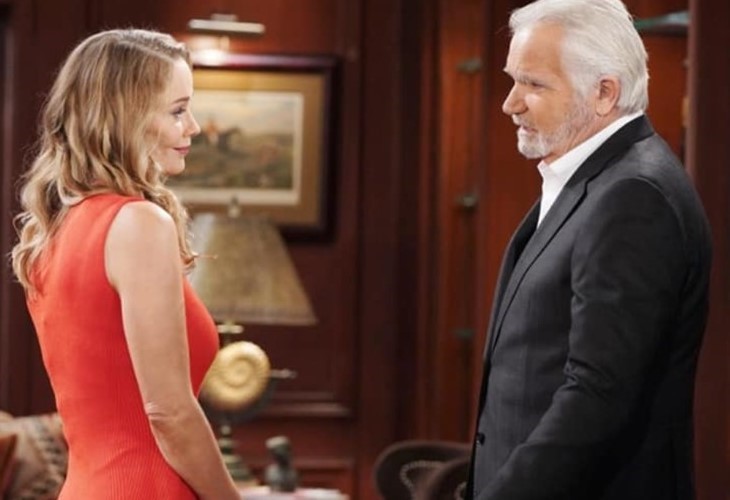 The Bold and the Beautiful (B&B) spoilers for Wednesday, October 27, 2021, reveal Donna Logan needing to reassess her life after that intriguing moment with Eric Forrester.

The Bold And The Beautiful Spoilers – Is Donna Logan Ready To Go For It?

Donna’s Honey Bear certainly likes honey, especially when it’s eaten off of his finger by his ex-wife. In fact, all his little problems are now solved — as long as he is not with his wife, Quinn (Rena Sofer). And that’s what Donna (Jennifer Gareis) feels guilty about.

Eric (John McCook) is a married man and she’s not about to be a homewrecker no matter how much Brooke Forrester (Katherine Kelly Lang) does her best to convince her and Eric that dumping Quinn and reuniting with one another would be the best thing for them. Doesn’t Brooke know all and shouldn’t she be listened to no matter what? Well, Donna doesn’t think so and she’s willing to make a sacrifice in her own life in order to do what she feels is the right thing. But, will Eric let her?

Liam Spencer (Scott Clifton) and Steffy Forrester (Jacqueline MacInnes Wood) have been spending an awful lot of time together while their spouses, Finn (Tanner Novlan) and Hope (Annika Noelle), have also been spending a lot of time with one another. And now those spouses have news. They got an eyeful the other day and that eyeful was about their parents.

Steffy and Liam can hardly believe that Sheila Carter (Kimberlin Brown) and Deacon Sharpe (Sean Kanan) are now an item — and that’s because it’s not true. But Steffy and Liam aren’t sure about that yet. That doesn’t mean they’re not determined to find out exactly what’s going on. Will Hope and Finn decide to join them on their escapades? That might be a very good idea considering who they are both dealing with.

Steffy and Liam can never seem to stay away from one another. Having a mystery to solve–for the sake of their respective spouses, of course–can throw everything off course. At least Hope and Finn will have each other. Stay tuned to The Bold and the Beautiful weekdays to see how these stories play out.