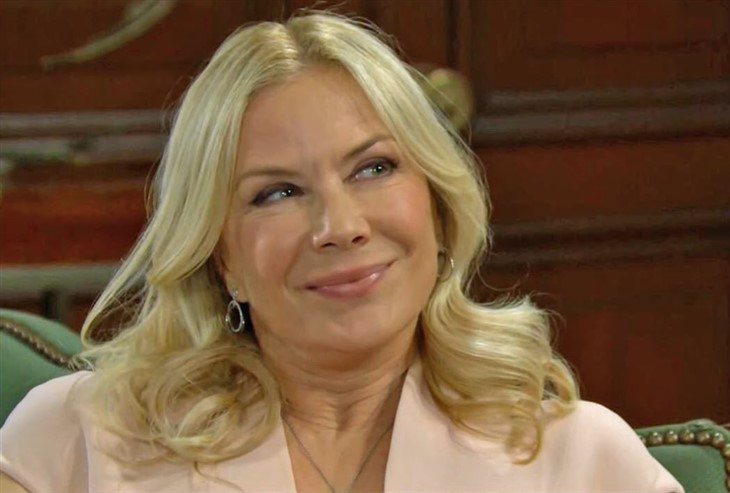 The Bold And The Beautiful Spoilers indicate that Brook Forrester (Katherine Kelly Lang) will play cupid between exes Donna Logan (Jennifer Gareis) and Eric Forrester (John McCook). Quinn Forrester (Rena Sofer) will nip it in the bud by forbidding Eric to have contact with Donna. Will Quinn’s demands work?

The Bold And The Beautiful Spoilers – Brook Forrester Knows The Truth

The Bold And The Beautiful’s Brook know that Donna is still in love with Eric and wants him back. Donna is no fan of Quinn’s and doesn’t want her anywhere near Eric. Donna knows all about Quinn’s affairs with Carter Walton (Lawrence Saint-Victor) and doesn’t believe she should have betrayed Eric. Donna realizes how hurt Eric is by Quinn’s actions and wants to help him. Donna wants Eric to feel like the man he once was. Brook is behind her sister and wants Eric to be happy as well. Brook doesn’t believe that Quinn is the answer to Eric’s needs. Brook believes that Donna can make Eric happy and is determined to make that happen.

The Bold And The Beautiful’s Quinn has been told what Brook and Donna are up to and she is determined to put a stop to it. Quinn knows that Brook wants her gone and will do anything to get her way. Eric isn’t going to send Quinn packing on his own. However, if Eric falls for another woman, that may change. Quinn knows that she needs to keep Eric with her or she is history. Will Eric get rid of Quinn and reunite with Donna?

The Bold And The Beautiful Spoilers – Quinn Forrester May Make Demands

The Bold And The Beautiful’s Eric has recently demanded that Quinn break off her affair with Carter even though he came up with the idea of them being together. Quinn has given Eric what he wants but she may make some demands in return. If Quinn is going to stay away from Carter, it is only fair that Eric stays away from Donna. Could Quinn demand that Eric fire Donna from Forrester Creations? Quinn isn’t about to share Eric the way he did her. Quinn certainly isn’t going to let a Logan woman have her man. Will Eric get rid of Donna for Quinn?

Quinn and Eric have a lot of issues in their marriage and his ED is just the tip of the iceberg. Do Quinn and Eric even belong together? Could Eric’s annoyance with his wife be the cause of his sexual problems with her?