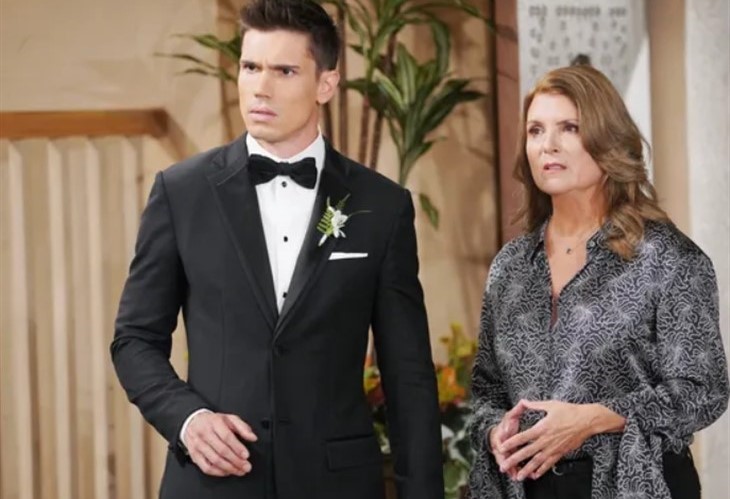 The Bold and the Beautiful spoilers reveal that Sheila Carter (Kimberlin Brown) is going to impact “SINN” in more ways than they could ever imagine. Will John “Finn” Finnegan (Tanner Novlan) and Steffy Forrester (Jacqueline MacInnes Wood) survive Sheila? Novlan teased that if the couple does make it, they will have to really fight hard to stay together.

The Bold And The Beautiful Spoilers – Sheila Carter’s Mom Bomb

B&B spoilers reveal that last week ended with Finn getting off a phone call regarding a patient. He heard someone and apologized for interrupting as he thought the room was empty. That is when Sheila emerged from the dark corners of the guesthouse. This week, Finn will learn that the woman’s name is Sheila Carter and she claims to be his biological mother.

Finn Immediately Grabs Sheila Carter To Introduce Her To His Family And In-Laws. However, The Response Isn’t Quite What Finn Expects.

When Finn brings Sheila to the reception area to meet everyone, Ridge Forrester (Thorsten Kaye) makes a demand. Most likely, he orders Sheila to get out and never get near his family again. It is teased that Ridge’s family will back him up. Steffy will go into a rage and make demands to Finn regarding his alleged mother. At some point, the Forresters talk to Finn and explain everything that Sheila has done to their family over the years.

The Bold And The Beautiful Spoilers – John Finnegan’s Redemption Belief

The Bold and the Beautiful spoilers reveal that Finn will be torn over Steffy’s demand. He understands that Sheila has committed some outrageous and extreme stunts in the past. At the same time, he desperately wants to get to know his only genetic connection. He has questions that need answers and he also wants to see what kind of person Sheila is now. He truly believes that even the most horrible person is capable of change. So, despite Steffy’s demand, Finn will betray her and get to know Sheila anyway.

Speaking to SoapCentral, Novlan explained that if Finn and Steffy survive Sheila, they will have to fight for it.

“He’s always been a nurturer to her, and now, this is throwing another major wrench in her life, and it’s coming from him. In the past, it’s always been him helping Steffy through what she needs, and now we’re walking a really interesting line where both of them have an issue, and they’re going to have to fight to stay together — if they can.”

What do you think will happen with “SINN?” Can Finn and Steffy fight hard enough to survive Sheila and stay together? Or will they be torn apart by this?