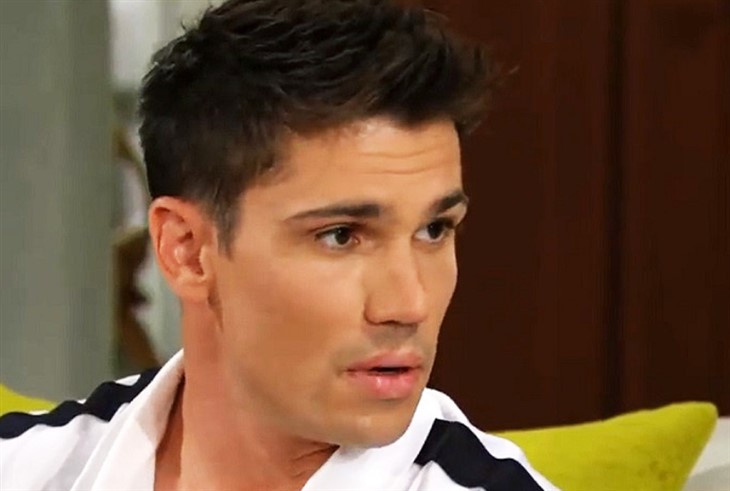 The Bold and the Beautiful spoilers reveal that Steffy Forrester (Jacqueline MacInnes Wood) lays down the law. However, John “Finn” Finnegan (Tanner Novlan) wants to know his mother, who is ecstatic that she’s a grandma. It is confirmed that Finn keeps a new secret from Steffy. Could he allow Sheila Carter (Kimberlin Brown) to see Hayes Forrester Finnegan?

The Bold And The Beautiful Spoilers -Steffy Forrester Lays Down Law

B&B spoilers reveal that everyone at Finn and Steffy’s wedding reception will be confused and mortified when Finn returns. He won’t approach everyone alone but with someone they recognize. It’s none other than Sheila Carter, whom he introduces as his biological mother. He is so excited about it and everyone else is just the opposite. It makes Finn confused because they are usually so warm and welcome to those they meet.

Steffy will lay down the law to her husband regarding his mother. She has been through too much with that woman and will not go through it again.

Even though Finn would respect Steffy’s wishes under normal circumstances, this is different. Finn has wondered about his birth parents his entire life. All of a sudden — and on Finn’s wedding day no less — she shows up. Finn just wants to get to know her and get some answers. Long-term, he has visions of Sheila becoming part of their family. He wants Sheila and Steffy to get along and to be connected. He also would like his son to be able to have a relationship with his grandmother.

Finn is torn between doing what he thinks is right and respecting Steffy’s wishes.

The Bold And The Beautiful Spoilers – Keeping Another Secret

The Bold and the Beautiful spoilers reveal that Finn keeps another secret from Steffy. This one will be so much worse than him being adopted. It must have something to do with Sheila, which means Finn disobeys Steffy’s orders. Due to Finn not really understanding what Sheila put the Forrester family through, he will try to bond with his mother.

During interviews with Soap Opera Digest, Brown explained that Sheila is excited that she has a grandchild. So, that indicates at some point, Sheila will want to meet Hayes and bond with him.

Despite Steffy being crystal clear, it sounds like Finn is going to betray his wife’s rules. Steffy is already going to have a hard enough time trying to deal with Sheila being Finn’s mother, as well as Hayes’ grandmother. How will she react after finding out Finn has been spending time with Sheila and possibly bringing Hayes to those visits? Will “SINN” survive this ordeal?