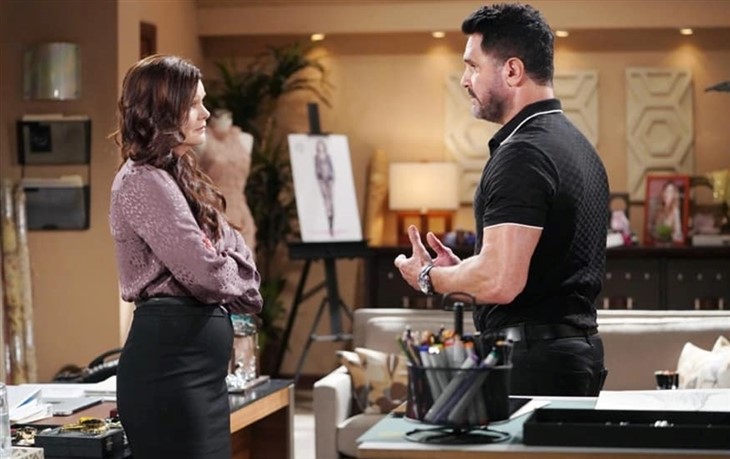 The Bold and the Beautiful spoilers reveal that Katie Logan (Heather Tom) has decided to move on from Bill Spencer (Don Diamont). Right now, there seem to be sparks flying between Katie and Carter Walton (Lawrence Saint-Victor). However, will Bill really let Katie be with someone else or could he target the Forrester Creations COO?

The Bold And The Beautiful Spoilers – Bill Spencer Out of Chances

B&B spoilers reveal that no matter what Bill did, Katie always seemed to take him back. Sometimes they would separate for a little while, but Bill always knew he could find a way back into Katie’s heart. However, this time is different. It’s been several months now and the two remain separated. When Bill brought it up to Katie, she admitted that she was ready to move on. Katie knows that she deserves someone who is in love with her and only her.

After Quinn Forrester (Rena Sofer) broke Carter’s heart yet again, Katie confronted the COO. The two had a heated discussion which turned into understanding. Since then, the two have seemed to become not only friends but possible love interests. Sparks are flying between the two of them, but will Carter and Katie end up together?

The Bold And The Beautiful Spoilers – Romantic Epiphany

The Bold and the Beautiful spoilers reveal that a friend helps Carter look within. This could be any number of people, but it’s possible that friend is Paris Buckingham (Diamond White). Even though there seems to be a mutual interest between Carter and Paris, the social worker is with Zende Forrester (Delon de Metz). Carter knows that Zende is going to propose. At one time, Carter mentioned that Zende was one of his oldest friends.

After the drama with Quinn and Eric Forrester (John McCook), Carter might not want to get involved in another messy love triangle. So, could Paris lead Carter to actually make a move on Katie?

Even though Katie is interested in moving on and certainly thinks Carter is special, how will Bill feel about that? Bill keeps insisting that Katie is the only woman for him. Plus, he doesn’t handle losing well. It’s very possible that Katie could end up unintentionally starting a war. The question is how far will Bill go to prevent Katie from moving on? What will Bill do to send a message to Carter?

Who do you think helps Carter look within? What does the romantic epiphany have to do with and what does the future hold for Carter, Paris, Bill and Katie? We will have to keep watching the CBS soap to find out.