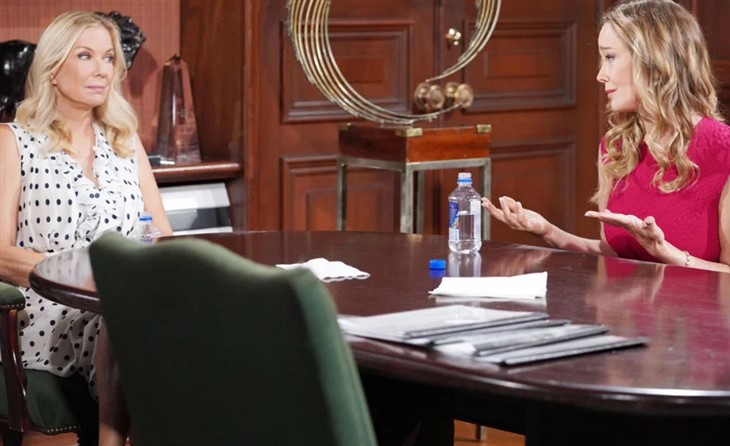 The Bold and the Beautiful (B&B) spoilers for Tuesday, September 14, 2021, reveal in Los Angeles the Logan sisters continuing to dish about their love lives while Eric Forrester makes a huge decision about his — or lack thereof.

The Bold And The Beautiful Spoilers – Katie Logan Has Some News

It looks like Logan sister week as Brooke (Katherine Kelly Lang), Donna (Jennifer Gareis), and Katie (Heather Tom) enjoy Chinese food and discuss the men in their lives or men who have been in their lives. Brooke has been happy with Ridge (Thorsten Kaye) for over a year now so her love life is pretty boring, but Donna can’t stop talking about being in love with Eric without actually doing anything about it.

It’s been months since Donna admitted to Katie she still thinks about Eric (John McCook) all the time but for some reason, even when he was not with Quinn (Rena Sofer), she refused to take action. Now Katie admits that she’s ready to take action with her own love life. She’s thisclose to taking Bill (Don Diamont) back after all this time. However, she has also been saying that for months on end but has yet to do something about it. Is Brooke the only proactive Logan sister there is?

Not being able to keep up with Quinn — so to speak — is eating away at him. So much so that he can’t bear the thought of Quinn never having the chance to have sex again. She is younger and more vivacious and still deserves to have a sex life that he just can’t give her. So, despite her protests, he essentially gave her to Carter (Lawrence Saint-Victor) and now Quinn and Carter have to decide if they will honor Eric’s wishes for them to have sex or not.

As Quinn and Carter ponder their new surprising situation, Eric agonizes over his decision and wonders if he did the right thing. Surely, he doesn’t stay to watch and see what Quinn and Carter decide to do. That would be a bit… awkward. As would Donna coming to him now and announcing he is still the love of her life. Stay tuned to The Bold and the Beautiful weekdays to see how these stories play out.